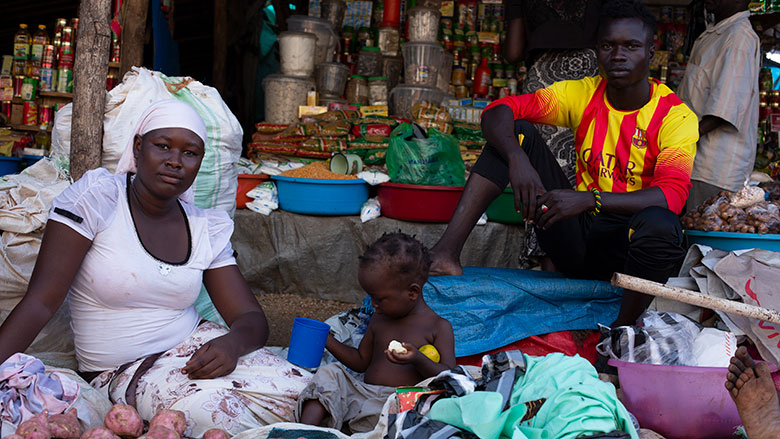 JUBA, April 2, 2020 – Nine years after securing its independence, South Sudan remains one of the world’s poorest and most fragile states. According to the World Bank’s latest South Sudan Economic Update: Poverty and Vulnerability in a Fragile Environment, conflict and fragility have taken costly toll on the economy and resulted in huge human cost; four out of five South Sudanese live in absolute poverty, and nearly seven million people—more than 60% of the population—face a food crisis, food emergency, or food catastrophe, and 1.9 million people are internally displaced, and nearly 2.3 million reside in neighboring countries.

“My life is difficult. My four children and I have been refugees in Ethiopia for nearly five years now,” said Kristina. “We fled when the violence got really bad. Every time I hear of a new peace deal, I dream of going back to my country, South Sudan. I hope that my dream will come true one day.”

Conflict also resulted in a negative growth rate for South Sudan, however, the Revitalized Peace Agreement has had a positive impact on the economy. The report indicates that after a four-year economic shrivel, the South Sudanese economy appears to be recovering with a growth rate of 3.2% due to the strong rebound of the oil sector. However, limited expenditure on key services meant to improve the lives of poor citizens, and limited linkage between oil-led and non-oil economy has created a disconnect between the growth and citizen welfare.

The effects of the prolonged conflict continue to affect most of the country’s population. Despite vast natural resources and oil wealth, South Sudan’s economy remains fragile, and inflation and parallel exchange market premiums continue to soar. As of October 2019, inflation is estimated to have risen to 170%. While food prices have gone down due to increased trade flows, better access to markets, and recovering domestic production, the report notes that prices are still high in absolute terms, and many families, such as Margaret’s, can barely afford the minimum food basket.

“The prices of basic food items are going up all the time,” she said. “My family and I cannot afford to give three meals a day. If we get to eat once a day, we are grateful.”

Looking ahead, the report estimates that South Sudan’s economy will grow at 7.9% during FY2019-20. However, a collapse of the peace agreement could push it back into recession.

Specifically, for South Sudan to achieve its economic ambitions and ensure the prosperity of its citizens, the report proposes the following priority measures:

The World Bank’s South Sudan Economic Update analyzes trends and constraints on recent economic developments in the country. Each issue has a special focus on a topical issue. The Update series aims to share knowledge and stimulate debate among those interested in improving the economic development of South Sudan.