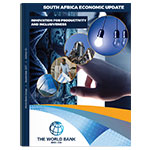 PRETORIA, September 19, 2017 –The tenth edition of the South Africa Economic Update, Innovation for Productivity and Inclusiveness, examines how innovation can boost economic growth in South Africa and help it address its most pressing social challenges.

Recently released statistics show that, between 2008 and 2015, four out of five South Africans experienced poverty—half permanently and half intermittently—and that, between 2011 and 2016, 3 million more South Africans joined the ranks of the 30.4 million living on less than US$2.90 a day. Unemployment reached a 14-year peak of 27.7% in 2017.

The Bank's Update forecasts timid recovery in the next three years, with South Africa's economy anticipated to grow barely faster than the country’s population,and real Gross Domestic Product (GDP) growth projected at 0.6% in 2017, 1.1% in 2018, and 1.7% in 2019. It argues that declining Research and Development (R&D) is an important factor behind the country’s weak economic performance and South Africa's divergence from its emerging market peers in terms of growth in technology.

R&D spending, which is essential for identifying and assimilating innovations generated elsewhere to produce new products and services, has declined in South Africa over the past decade, to the detriment of the poor. This is primarily because innovation strongly influences the welfare of low-income households by reducing their cost of living within sectors that have an impact on their daily lives, such as public transport, and beverages, agriculture and footwear.

This decline in R&D spending has taken place despite a high rate of economic return when investment is made. With some exceptions, the Update states that South Africa’s academic excellence and strong urban networks of entrepreneurs and opportunities innovation are being stifled by an unconducive business environment, expensive trading costs, and low skills base—all of which are impeding the growth of startups whereas elsewhere, young, high-growth firms known as “gazelles” are playing a leading role in innovation.

“Given the transformative role of gazelles around the world in creating jobs, South Africa’s small and diminishing share of young firms is a concern,” said World Bank Lead Economist for Trade and Competitiveness, Gabriel Goddard. “Improvements to factors that either stifle the emergence of young firms, or reduce their growth potential, could boost South Africa’s innovation capabilities and overall impact."

The Update says Information Communications Technology (ICT) capabilities have become particularly important, enabling new business models and the emergence of new markets. Its study shows that, although South Africa has remarkable individual stories of ICT success in financial technology, education, e-health and online job platforms, the Information Technology industry remains relatively small, constrained as it is by the high cost of broadband.

The report offers considerations for policy, including fostering a business climate more conducive to both the entry of new firms and to risk-taking and experimentation, building a skills base in technical and entrepreneurial skills, and encouraging “brain circulation” into South Africa.

It also suggests improving South Africa’s connectivity to global markets and increasing the effectiveness of sophisticated support systems for entrepreneurship.