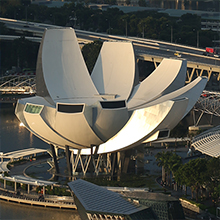 The World Bank In Singapore

50 years ago, Singapore was confronted with severe unemployment, poor infrastructure, and a housing shortage. Today the city-state is ranked as one of the most livable cities, boasting one the highest levels of human capital development in the world.

Singapore: Commitments by Fiscal Year (in millions of dollars)*

Find out what the Bank Group's branches are doing in Singapore.