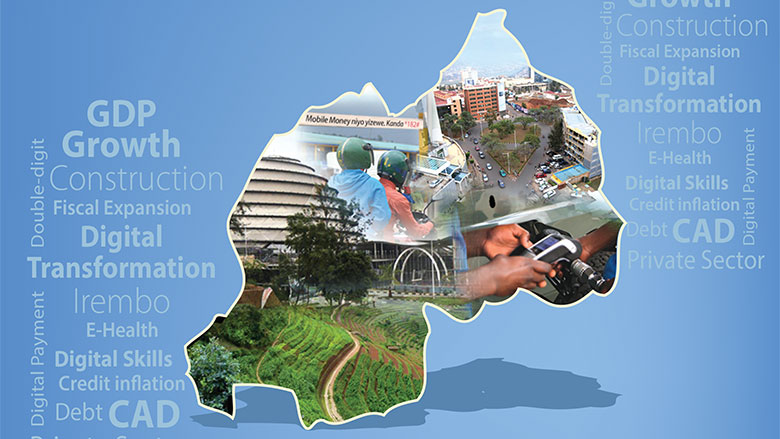 KIGALI, January 28, 2020 – When the government created the Irembo citizen e-service portal in 2014, the idea was to help citizens submit applications and make payment for various services, thus shortening the gap between them and the administration. Today, more than 96 services are just a button-push away for more than nine million subscribers and thousands of others who can access the online services through Irembo agents across the country.

“In the past, to get a passport, for instance, one had to move from one office to another collecting different documents and going to the bank to pay before getting the service you needed,” said Bertha Buzene, a businesswoman in Kigali who often uses Irembo services. “Today, through Irembo, you can get all those preliminary documents without leaving your seat. What used to take a week, or even more, and cost a lot has come down to three days, and costs far less.”

Irembo is one example of the substantial public investment in digital infrastructure and digital service delivery highlighted in the Rwanda Economic Update (REU15) Accelerating Digital Transformation in Rwanda.

The investments, as well as enabling regulatory reforms, has helped Rwanda achieve some of the highest 3G and 4G network coverage rates on the continent, bringing virtually all Rwandans within range of mobile broadband. By 2019, mobile internet subscribers numbered 7million – 58.3 for every 100 people. It has also facilitated digitalization of other services, among them financial (mobile money, mobile banking services), agriculture (e-Soko), health (Mobile e-Health), and administrative services (Irembo).

During the 32nd Ordinary Session of the African Union in Addis Ababa, President Paul Kagame said that digital identity is the start of a long and valuable chain of capabilities that make citizens better able to participate productively in the regional and global economy. “The future of the global economy is digital,” he said.

For Rwanda to leverage digital transformation as a driver of growth, the REU15 says digital adoption will need to improve markedly by increasing affordability of digital devices and services and removing barriers to uptake. Rwanda will also need to bridge the lingering basic digital skills gap and boost the value proposition of digital tools and services to increase local demand for digitally-enabled platforms.

Moving forward, the report suggests the private sector will need to play a far greater role in spearheading digitization in Rwanda. This could be through both increased technology adoption and support for innovation that can enhance productivity, spawn new services and create new off-farm jobs. Private sector-led digital economy growth will also need to be fueled by growing private sector investment in digital enterprise, the report says, as well as greater overall investment in human capital that boosts Rwanda’s digital skills base, leveraging both traditional and non-traditional approaches.

”Rwanda has already begun charting an ambitious course for achieving rapid digital transformation and demonstrated a clear commitment to embracing the digital economy as a lever for accelerating growth, improving services delivery and increasing job creation,” Isabella Hayward, World Bank Digital Development Specialist. “While Rwanda has made substantial progress and key investments in this area, critical challenges lie ahead – notably, bringing more Rwandans online, increasing use of digital services and crowding in the private sector.”

Given its small market size, the report also notes that Rwanda will need to be at the forefront of efforts to create a larger, more integrated digital market in East Africa and beyond to help decrease the costs for digital services for consumers and create room for digitally-enabled firms to quickly scale. As digital adoption increases, the country also will need to do more to secure online transactions and protect users according to the REU15; through the expansion of digitally-enabled trust services, balanced data protection provisions and stronger cybersecurity capabilities; this will help create a virtuous cycle of further digital adoption.