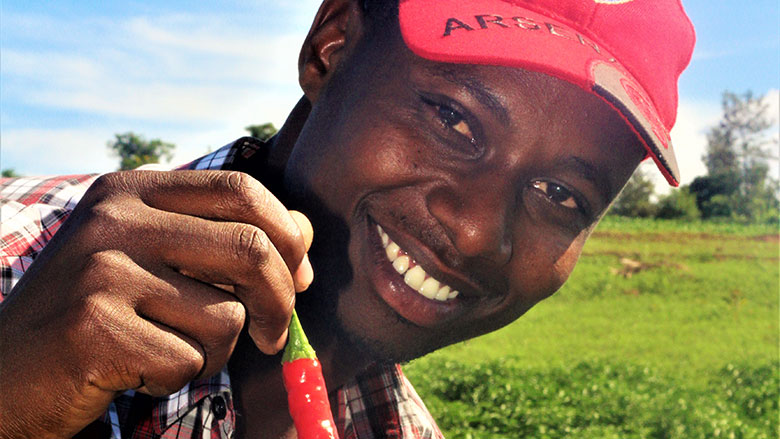 Dieudonné Twahirwa holding up a pepper from his farm Gashora. 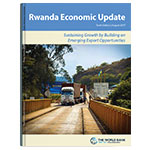 Rwanda Economic Update : Sustaining Growth by Building on Emerging Export Opportunities
The World Bank charts an increase in exports from $400 million in 2007 to $1.6 billion in 2016, with non-traditional exports, like chili, behind that growth.

KIGALI, September 6, 2017—When 29-year-old Dieudonné Twahirwa quit his white collar job as an agronomist at the large Pyrethrum firm back in 2013, exporting chili pepper wasn’t his immediate objective. As a fresh entrepreneurial graduate, he just was looking for something more challenging, vibrant, and profitable. Today, he is in business and exploring new horizons to expand his small but growing commercial farming enterprise.

Within two years of starting his business, Twahirwa’s Gashora Farm Ltd has so far exported 24 metric tons of fresh chili valued at $17,000 to the United Kingdom, 100 liters of chili oil to the United States and to Switzerland worth $6,070, and has six metric tons of African Bird Eye chili worth $30,000 expected to be exported to Belgium this September.

“There is an insatiable market out there for all varieties of chili peppers, and their harvesting period is shorter and prices more stable than with tea and coffee,” gushes Twahirwa who, after realizing that the original six hectares he was farming wasn’t enough to satisfy his market, expanded to 160 hectares and brought in new growers. Today, he harvests ten metric tons of dry chili every season.

For decades, coffee and tea dominated Rwanda’s traditional agricultural exports. However, while the two remain critical sources of income, their input towards the country’s overall export earnings has dropped to less than half of the total, ceding to emerging nontraditional exports such as chili.

This was one of the main findings in the 10th edition of World Bank Rwanda Economic Update entitled, Sustaining Growth by Building on Emerging Export Opportunities. 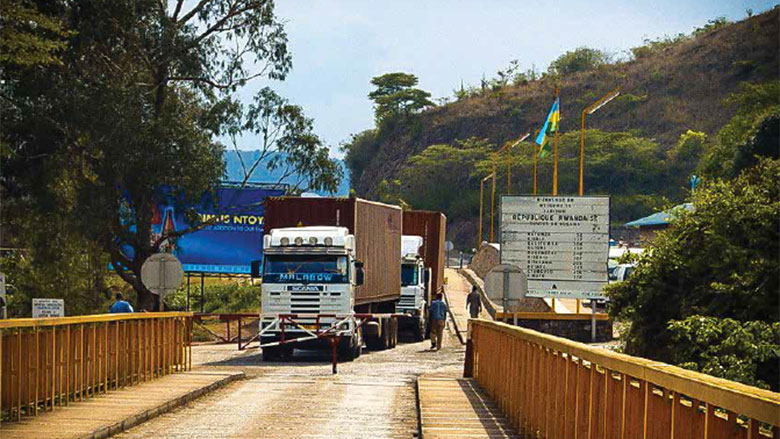 “Despite the challenges we encounter throughout the process, there is real potential in horticulture. In addition to growing external demand for horticultural products, the local market is also steadily picking up, especially in urban areas,” remarked Twahirwa, who is now seriously considering expanding farming to include other exportable goods his business.

With over one million people employed in the horticultural sector, the growth of the sector has the potential to improve livelihoods. According to National Agriculture Export Board (NAEB), export revenues from horticulture in 2015 dropped to $6.7 million from a $9 million in 2014 mainly due to a 24% decline in volume during this period. This volatility is something that the government is hoping and working towards rectifying. Last June, NAEB signed a joint venture agreement with a local firm, ProDev Bugesera, to boost the country's export potential of horticulture products. The objective is to carry out modern commercial farming in Gashora marchland and promote the growth of vegetables that have high export potential for Rwanda.

To ensure sustainable export growth, the Rwanda Economic Update highlights some policy considerations, notably maintaining a competitive real exchange rate by avoiding exchange rate misalignment, focusing on agriculture as a strategic sector that provides raw materials for emerging agribusiness, and continued engagement at the regional level to identify and remove non-tariff barriers within the EAC region.

Consult the full 10th edition of the Rwanda Economic Update and its findings for more information on this story and the country’s current economic trends.