Rolling Back Russia's Spatial Disparities: Re-assembling the Soviet Jigsaw Under a Market Economy 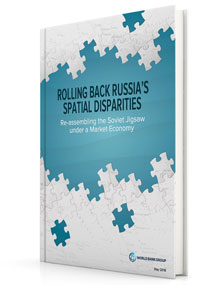 Rolling Back Russia's Spatial Disparities: Re-assembling the Soviet Jigsaw Under a Market Economy

In Russia, spatial disparities matter for growth, equity, and institutional outcomes. Addressing them is therefore a priority for policymakers. But, what exactly do “spatial disparities” refer to in the context of this report?

Unlike the case of income inequality (which relies on the Gini coefficient), there is no standard approach to estimating spatial disparities. Instead, there are different approaches and indicators. Some studies look at the convergence of nominal and real incomes and wages, while others compare poverty levels across regions. Others look at the distribution of access to services or the agglomeration of economic activity.

In this report, spatial disparities are broadly understood as inter- and intra-regional inequalities along various macro- and micro-dimensions ranging from differences in Gross Regional Product per capita (GRP pc) to differences in households’ access to services. It is this broad notion of spatial disparities that the report endeavors to capture, and in doing so, specifies which indicator is used and when.

There is an extensive breadth of Russian scholarship analyzing spatial disparities in the country. However, earlier studies mainly looked at trends in regional convergence, and evidence on more recent trends is largely lacking. Moreover, at the micro-level, few studies have used survey data to understand the drivers of spatial disparities at the household level.

While it is true that spatial disparities in Russia are high, it is not clear whether they have been increasing or decreasing, especially in the last decade or so. Taking a “macro- to-micro view”, this report aims to fill these much-needed gaps with an ensemble of new approaches, data, and methodologies. It takes stock of the current state of spatial disparities as measured by differences in both monetary and non-monetary welfare.

The report also assesses how well the economic performance of Russia's regions stack up against their “economic potential”. It is hoped that, collectively, these findings shed light on actionable policy directions for rolling back spatial disparities. This report prompts further discussion and debate related to Russia’s spatial disparities.