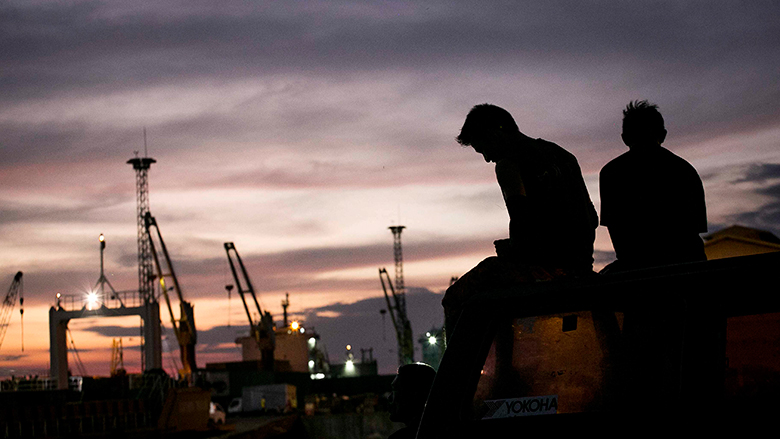 In 2017, the Philippines was among the top three growth performers in the region. Only Vietnam and China did better. The Philippine economy grew from 6.9 percent year-on-year in 2016 to 6.7 percent year-on-year in 2017. Growth was anchored in strong exports, while investment growth significantly slowed and consumption growth moderated. The Philippines’ annual exports rose sharply in 2017 and became the main engine of economic growth, while imports continued to grow by double-digits. Investment growth slowed in 2017, following two consecutive years of rapid expansion, and climbing inflation slowed real wage growth and contributed to a moderation in private consumption growth.

Sustained economic growth is likely to continue to contribute to poverty reduction. Under the assumption that the responsiveness of the poverty rate to economic growth follows historical trends, the poverty rate, based on the lower middle-income poverty line of US$3.20/day, is projected to decline from 27.0 percent in 2015 to 22.9 percent and 21.7 percent in 2018 and 2019, respectively, as economic growth remains robust. These projections would imply a continuing trend of one million Filipinos being lifted out of poverty each year. Factors that have been driving poverty reduction in the Philippines include the movement of employment out of agriculture, a sustained inflow of remittances, and the government’s conditional cash-transfer program.

The country’s medium-term growth outlook remains positive. The Philippine economy is projected to continue on its expansionary path and grow at an annual rate of 6.7 percent in both 2018 and 2019. In 2020, growth is expected to level at 6.6 percent. The economy is currently growing at its potential, making productive investment in physical and human capital essential so that the economy can continue to grow along its current growth trajectory. Investment growth hinges on the government’s ability to effectively and timely implement its ambitious public investment program. Moreover, the government needs to clarify the role of the private sector in its investment program.

Domestic risks are becoming more prominent. Inflationary pressure is expected to intensify in 2018 due to both domestic and external factors. The Philippine economy is also at risk of overheating. The implementation of the public infrastructure program is vital to the country’s growth outlook, as private investment is expected to weaken. Prudent fiscal management and the implementation of the government’s tax reform agenda could help secure the country’s fiscal sustainability. External risks remain present, especially a faster-than-expected policy normalization in advanced economies that could trigger financial volatility and increase capital outflows from the Philippines. Renewed protectionist sentiments in several advanced economies will also elevate policy uncertainty, which may disrupt trade and investments.

Higher real wages are essential to achieve shared prosperity and inclusive growth. In recent years, the Philippine economy has made great strides in delivering inclusive growth, evidenced by the declining poverty rates and a falling Gini coefficient. Unemployment has reached historic low rates, but underemployment remains high, near its 18-20 percent decade-long average. More importantly, unlike its high-performing East Asian neighbors with booming manufacturing sectors that provide large numbers of labor-intensive jobs, a majority of Filipino workers that transition out of agriculture generally end up in low-end service jobs. Thus, while employment increased between 2006 and 2015, mean wages remained stagnant, with only a four percent increase in real terms over the same period. Low job quality and slow growth of real wages are the missing links to higher shared prosperity.