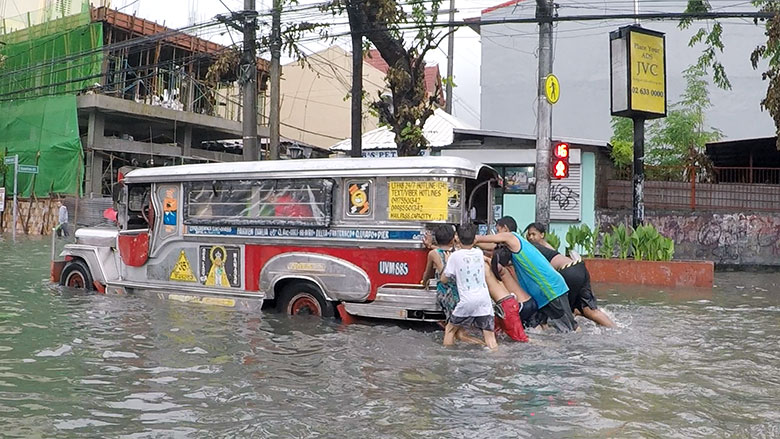 The Philippines ranks third among countries most at risk for disasters, including floods, storms, and earthquakes. In the past 30 years, more than 360 disasters struck the Philippines, with a total death toll of 33,000 people which affected 120 million people. Typhoons and floods are the most devastating in terms of their economic and social impact, accounting for 80 percent of all deaths, 90 percent of the total number of affected people, and 92 percent of the total economic impact.

Metro Manila is home to around 15 million people and contributes about 35 percent to the Philippine economy. Recurrent flooding has been a problem for millions of people in the metropolis. In 2009, Tropical Storm Ondoy (Ketsana) hit the country, causing damage and losses equivalent to around 2.7 percent of the country’s economy. In response, the Philippine government, with financial and technical support from the World Bank, formulated the Metro Manila Flood Management Master Plan, which was approved by the National Economic and Development Authority (NEDA) Board in 2012.

1. The master plan proposed a set of measures to effectively manage major flood events in the future which include the following:

2. Under the Metro Manila Flood Management Project, 36 existing pumping stations will be modernized, 20 new ones will be constructed, and supporting infrastructure along critical waterways will be improved in the cities of Manila, Pasay, Taguig, Makati, Malabon, Mandaluyong, San Juan, Pasig, Valenzuela, Quezon City, and Caloocan. Many of Metro Manila’s existing pumping stations were built in the 1970s and have become inefficient and underperforming.

3. Solid waste clogs waterways and the entries to pumping stations, affecting the operation and maintenance of the pumps. Hence, the project will improve management of solid waste within villages in the vicinity of drainage systems served by the pumping stations. It will also support government’s resettlement of informal settlers that have encroached on the waterways.

4. The Department of Public Works and Highways (DPWH) and the Metro Manila Development Authority (MMDA) will implement the project in close coordination with local governments and key shelter agencies.  Slated to start this year, the project is scheduled to be completed in 2024.