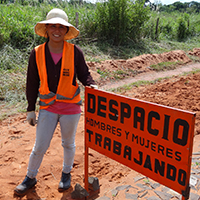 The World Bank In Paraguay

Thanks to its sound and predictable macroeconomic bases; solid financial system; poverty reduction and other policies, Paraguay has seen an extraordinary growth in the past few years and is one of the countries that was best able to cope with the COVID-19 pandemic.

Paraguay: Commitments by Fiscal Year (in millions of dollars)*

AROUND THE WORLD BANK GROUP

Find out what the WBG's branches are doing in Paraguay