ABUJA, April 30, 2018 — While Nigeria emerged from a recession in 2017, the country’s continued economic recovery will be slow, according to a new economic analysis.

The recently released Nigeria Biannual Economic Update: Connecting to Compete, says economic gains were largely driven by an expansion in oil output and continued steady growth in agriculture. However, the report notes, labor-intensive sectors remained weak, which contributed to an increase in the rate of unemployment and underemployment in 2017. Poverty is also believed to have increased slightly. Gross domestic product (GDP) growth, which reached 0.8% in 2017, is expected to hover just over 2% in 2018, according to the report.

The report also notes that the federal government’s Economic Recovery and Growth Plan (ERGP) is a positive step towards macroeconomic growth efforts, if properly implemented. In recent times, the government’s focus on business regulations has paid off; Nigeria has moved up in the World Bank Ease of Doing Business 2018 report, however the report says more intensive effort needs to be made to get the private sector energized. The report says that most of the structural reforms outlined in the ERGP need to go beyond the preliminary stages to ensure the economic growth targets envisaged.

The Nigerian government has identified the power sector as a critical focus, as is evidenced in the Power Sector Recovery Plan, with a focus to support implementation of power sector reform. The economic update qualifies these achievements, noting that Nigeria’s performance is still insufficient, particularly in the social sector. 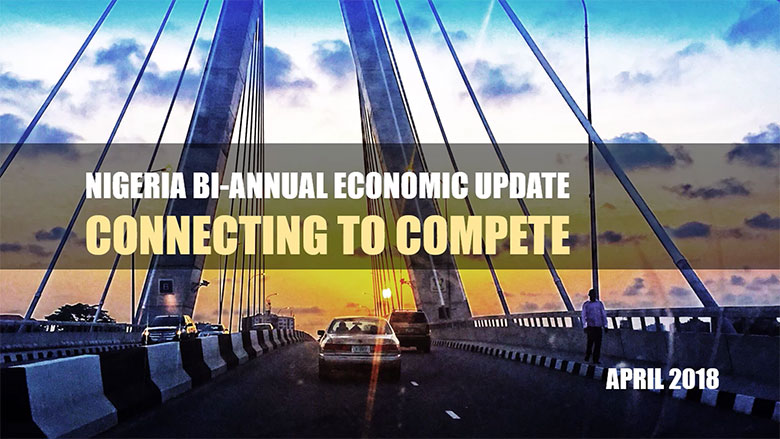 The report says that the country would benefit from policies to promote diversification and long-term inclusive growth, and focuses on leveraging regional connections and coordination to enhance Nigeria’s competitiveness. With a large population and growing middle class, there are 65 million economic active people in Nigeria. This big home market however suffers from spatial fragmentation according to the analysis. Furthermore, the domestic market is constrained by limited connective infrastructure thereby reducing producers and firms’ ability to reach wider markets. This lack of connectivity also dampens economic collaboration and cooperation among the country’s regions further hampering the prospects for poverty reduction.

“Spatial integration and sub-national specialization are key for creating a nationally-integrated market for goods and services as well as attracting much-needed private investment, which in turn could enhance productivity though scale and specialization,” said Somik Lall, World Bank global lead for Territorial Development.

The report also highlights the wide range of spatially targeted investments that have been implemented to develop regional economic development opportunities. The introduction of the cluster concept in the federal government’s national industrial policy for 2007-2011 has made room for the establishment of special economic zones (SEZs), such as Free Trade Zones (FTZs), Industrial Parks, Industrial Clusters, Enterprise Zones and Incubators. States are also beginning to coordinate their investment and strategic planning activities within geo-political zones. However, the report points out that SEZs and place-based polices have focused on coordination issues within the zone itself, rather than focus on connections with other states or within geo-political zones. At the state level, the report says that few actions have been implemented and it is proving difficult to promote coordination of activities across states.

The report recommends three priorities for public interventions regarding existing and new industrial cluster in Nigeria:

The report concludes that for economic growth in Nigeria to be sustained, place-based policies and spatial integration need to be complemented by investments in basic services and human development to foster a stronger business environment, and wider welfare gains.