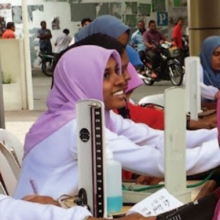 The World Bank In Maldives

A partner of the World Bank since 1978, Maldives has been a development success story of sustained growth and impressive improvements in health and education. The country faces a number of environmental, climate, and inclusion challenges that we're working together to help address.

Maldives : Commitments by Fiscal Year (in millions of dollars)*