Realizing the Potential of Safety Nets in Malawi 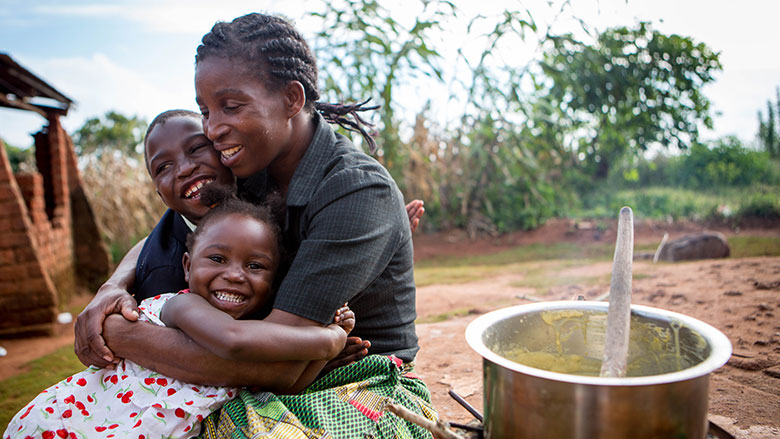 LILONGWE, June 11, 2018 – Josephine Mandere, 68, could not believe her luck when her fellow villagers chose her to be one of the ultra-poor people to benefit from the social cash transfer program. It meant getting MWK16,800 (about $25) every two months through the Malawi Social Action Fund, which for her was a firm step out of destitution.

“I started experiencing some positive changes in my life after receiving the first transfers in 2016,” said Mandere, who lives in Mkhumbi Village in the central district of Dedza. “I first bought a mat using part of the money and for the first time, my granddaughter and I slept on a mat. From that time sleeping on bare ground is now history,” she said.

With subsequent cash transfers, she started a beer brewing business, making enough money to roof her house with iron sheets, and bought a goat. “The most significant change in my life is the ability for me to provide school materials to my granddaughter because I believe that education is the way to success,” said Mandere. Her nine-year old orphaned granddaughter is in third grade.

Social cash transfers (SCTs) are one of the several social protection tools that Malawi uses to assist poor people in a country where about one in two people are poor. SCTs have contributed to the decline of ultra-poverty, an inability to meet basic needs, in absolute numbers. About a quarter of the population is estimated to live in ultra-poverty. Other major safety net interventions are school meals, public works, and food for assets.

Beyond remixing programs, the MEM suggests better targeting of the poor, and strengthening the scalability of the programs to cover more of the ultra-poor who account for a quarter of the population. The reforms to social safety net programs should also rely more on country systems and financial resources considering that 94% of the cost of Malawi’s social protection programs is funded by development partners.

Good progress, but need to be more cautious

Mandere was pleased to be a beneficiary of a social safety net program, particularly after she lost the agility to work in her garden. Failure to be productive agriculturally, along with susceptibility to climatic shocks such as droughts and dry spells, pushed her into untold poverty, as agriculture is a mainstay for most of Malawi’s citizens.

Due to an anticipated decline in agricultural production, the MEM 7 projects economic growth to moderate to 3.7% from 4.0% in 2017. Malawi has generally seen a recovery in key macro-economic fundamentals in the past year the report notes, and real gross domestic product (GDP) growth picked up after two years of depressed economic activity. Inflationary pressure remains subdued standing at 9.7% in April 2018, according to the report. This has been aided by the sustained deceleration in domestic price increases and a stable Malawi Kwacha, following a tight monetary stance by the Reserve Bank of Malawi. Consequently, interest rates have also declined albeit not enough to attract long term investment.

“Despite these improvements, in the MEM 7 we are recommending cautious optimism because Malawi is still susceptible to both internal and external shocks that quickly erode gains the country is making,” said Priscilla Kandoole, World Bank economist and lead author of the report. “In addition to improved and efficient safety nets that are flexible and adaptive to shocks, at a macro level, Malawi needs to implement difficult policy and institutional reforms to reduce distortions and improve performance of the agriculture sector, and restore basic public financial management and accountability systems.”