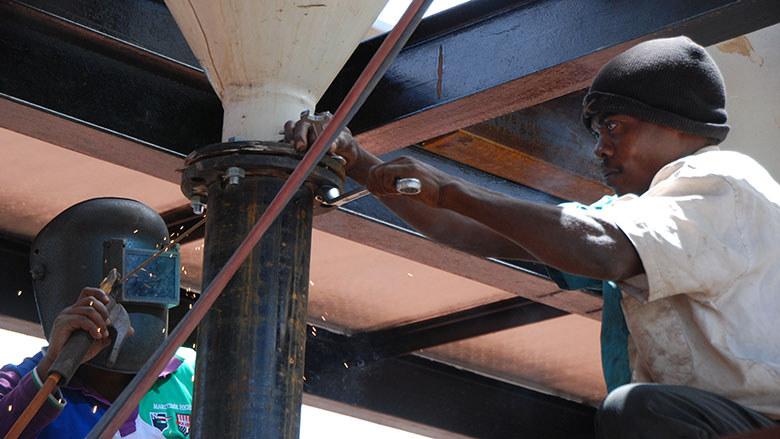 Steel works at Oil and Protein Company in Blantyre.

LILONGWE, November 22, 2017—Some 30 years ago, Malawi’s level of development was similar to that of a number of other countries in sub-Saharan Africa (such as Mozambique, Rwanda, Niger, and Burkina Faso). But today, the country lags behind many of her peers in the region despite having experienced no greater number of weather or other external shocks, and with the added advantage of having had peace and political stability.

This puzzle of Malawi’s slow pace of development raises a number of questions about past policy choices. “The questions that we have to answer—every one of us, particularly in the leadership—are: where did we go wrong? And how can we make it right?” Malawi’s Minister of Finance, Economic Planning and Development, Goodall Gondwe, said during the World Bank’s commemoration of 50 years in Malawi.

So, working in partnership with government and likeminded development partners, the World Bank Group has prepared a Country Economic Memorandum (CEM) to dissect the problem, and to propose practical ways for Malawi to move beyond business as usual.

“There is considerable consensus around the policies and investments Malawi needs to make to improve its record on growth and poverty reduction,” said Greg Toulmin, World Bank Country Manager for Malawi. “Malawi has from time to time shown it can do well economically; the challenge lies in consistent implementation. Hence the CEM focuses less on the ‘what to’, and more on the ‘how to’, of Malawi’s development pathway.”

Entitled From Falling Behind to Catching Up the CEM identifies ways for Malawi to achieve the sort of growth that benefits the poor. It recommends directions for policy in four, interrelated areas: macro-economic stability, agricultural transformation, private sector development, and institutional reform.

The Malawian government has already used several of its background papers to help prepare the third Malawi Growth and Development Strategy (MGDS III), which will run from 2017–2022. The theme of MDGS III is “building a productive, competitive and resilient nation.”

The World Bank will be developing its Country Partnership Framework for Malawi for 2018–2022 based on information by both the CEM and the MGDS III.

“The government’s immediate goal should be to restore and—even more importantly—maintain macroeconomic stability and low inflation,” said Richard Record, lead author of the CEM. “Such stability is a prerequisite for private investment and job creation, and is something that Malawi has struggled to achieve for long enough periods in the past.”

Central to achieving macroeconomic stability is reducing the size of fiscal deficits, managing the budget with the careful prioritization of expenditure, avoiding recourse to excessive domestic borrowing, and managing inflation.

The CEM observes that if stability is entrenched, it would then make room for the government to focus on the long-term policies and investments necessary to foster the volume of investment and job creation that Malawi needs. Furthermore, if Malawi is going to be able to absorb the impact of the next shock (such as drought or floods), then buffers need to be rebuilt by creating fiscal space and reducing domestic debt.

To help Malawi catch-up and turn around the country’s economic fortunes through agriculture, the CEM suggests a future vision of a significantly more diversified agriculture sector, where more specialized, high-productivity farmers supply markets with the food and other agricultural products that Malawi needs.

A more commercially oriented agriculture sector, that is more connected with international markets, and where public sector institutions operate in a reformed, more transparent way could help the country break the cycle of food insecurity and transform agriculture into a source of growth and development.

Much as agriculture is important to Malawi’s economy, there is also need for the faster development of the non-farm economic sector. The World Bank’s 2018 Doing Business report put Malawi among the world’s top improvers, but it still needs to do more in terms of implementing business-friendly reforms to build on its recent progress.

“The objective would be to develop an investment climate that can attract higher-quality investors and investments, and facilitate the creation of more and better-quality jobs in diversified sectors,” said Record.

Executing Reforms and Restoring the Effectiveness of Malawi’s Institutions

Much of what Malawi needs to do to start catching up with its peers is well known; its “lack of implementation” is all too often cited as the problem. The country is often successful in changing the way public sector institutions look, but struggles to achieve meaningful changes in the way that they actually function.

The CEM recommends taking a more “problem-driven” approach to undertaking public sector reform,  where greater experimentation is part of the process, and where policymakers look beyond selecting technical solutions to the identifying reforms that are politically supportable and practically implementable. Development partners will also need to adopt new approaches to help government fully execute reforms better.