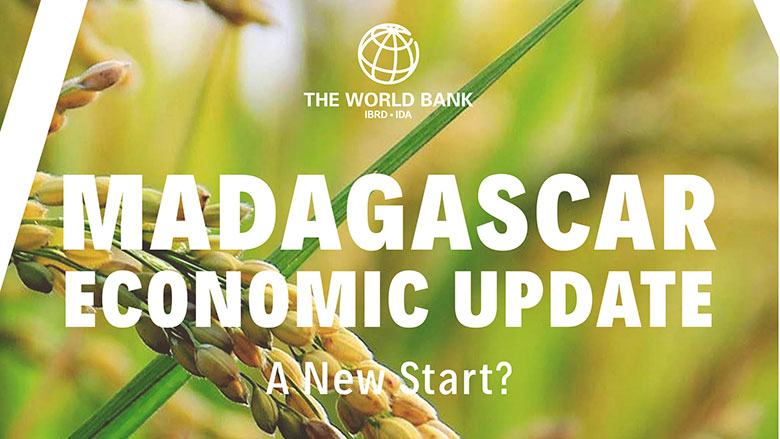 Here are some of the main takeawaysof the latest economic update for Madagascar:

Growth reached a decade-high of 5.1% in 2018, driven by robust activity in export-oriented sectors, but slowed in the first half of 2019 due to a combination of weakening external demand from key trading partners and the slow execution of public spending. In particular, as the new government took office following the presidential election end-2018, the establishment of the new administration and the revision of the 2019 budget were associated with slower budget execution, particularly for public investments.

Export revenues and industrial activity were also adversely affected by a significant deceleration in major export markets, which coincided with the flare-up of trade tensions between the United States and China. These two countries absorb 25% of Malagasy exports. This has put downward pressure on both the demand and price of Madagascar’s key export goods and was associated with a dip in industrial sales and order books at the start of the year. Weakening export revenues, including from cash crops and nickel, and sustained imports were reflected in a deteriorating current account balance. 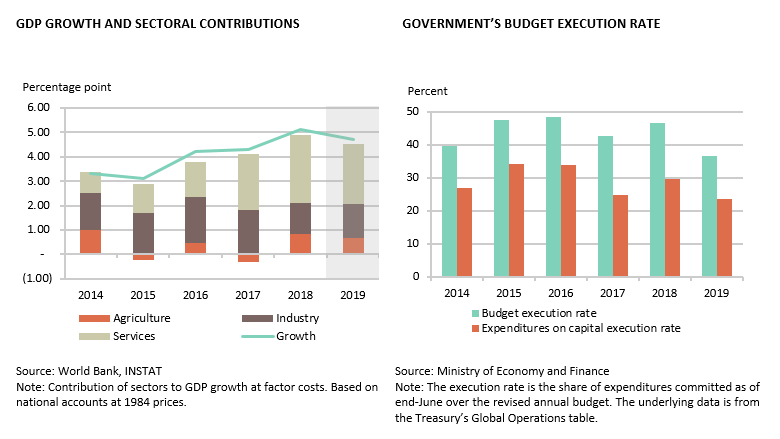 Following a slow start to the year, business confidence and demand expectations recovered in the second and third quarters, particularly in the manufacturing sector, which bodes well for private investment. The service sector is projected to remain the main engine of growth, accompanied by a rapid expansion of the manufacturing sector. The agriculture sector is expected to expand at a modest pace, slightly outpacing that of the overall population growth, assuming the absence of severe natural disasters.

Growth is projected to increase to 5.3% in 2020, on expectations of a scaling up of public investment, including in road, health and education infrastructures and a post-election rebound of private investment as confidence returns. In 2021, growth is expected to increase slightly further to 5.4%, as the upturn in public and private capital spending continues. Over the medium term, the growth potential of Madagascar continues to be held back by inadequate infrastructures, slow progress in human capital development, a lack of competition in key sectors, and poor governance. 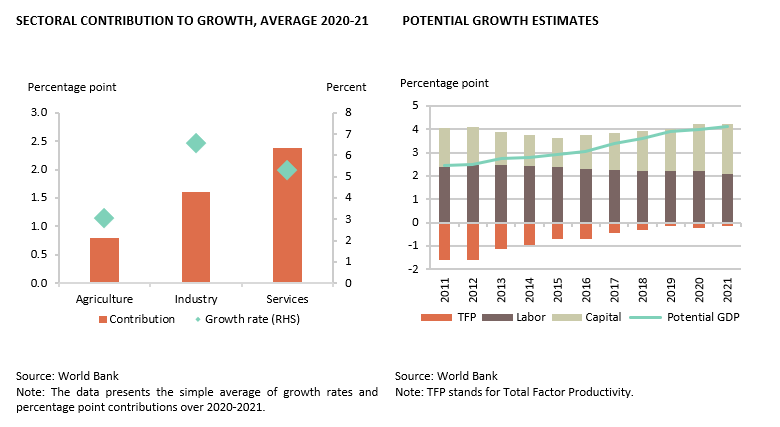 Downside risks to the outlook call for prudent fiscal policies

A successful transition of power after the 2018 presidential election substantially reduced risks related to political instability, but the materialization of other risks could lead to significantly weaker-than-expected activity in the coming years. These include a sharp economic slowdown of major trading partners, a sudden drop in vanilla prices from their current highs, or a hike in oil prices amid escalating geopolitical tensions.

Fiscal risks also need monitoring, including those associated with prospects of rising government deficits amid low domestic revenue mobilization, contingent liabilities towards state-owned companies, and a proliferation of unsolicited Public-Private Partnerships (PPP) projects. A lack of fiscal space could significantly constrain the government’s ability to respond to unexpected shocks, including severe natural disasters, which cost about 1% of GDP on average and can spike in the face of particularly severe events. 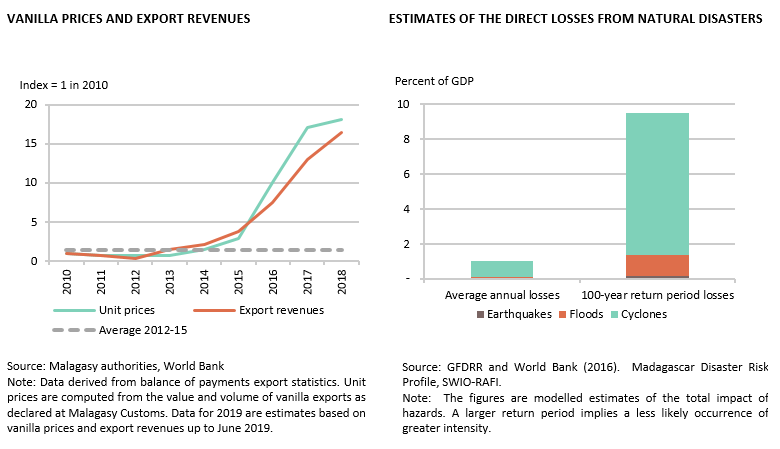 This report highlights the opportunity to review and potentially adjust different tax abatements and preferential tax regimes, which cost nearly a quarter of tax revenues every year. For a country such as Madagascar, whose tax revenue collection capacity ranks among the lowest in the world, this is a very significant shortfall. Tax expenditure decisions would require prior analysis of their relevance or potential impacts, as well as comparative analysis of whether direct public expenditures or regulatory measures would be more appropriate.

Without clear impact assessments, the net benefit of these tax expenditures is often unclear and revenue losses are compounded by opportunities for fraud or abuse. A more systematic and transparent cost-benefit analysis could help identify measures that are ineffective and that could absorb resources that could be better used in priority investments and social spending.

Strengthening competition is key to stimulate growth and job creation

Key sectors of the Malagasy economy are characterized by a high level of concentration and low levels of competition. The special focus of this report analyses business practices in the vanilla, lychee and telecommunications sectors as illustrations of this trend, and offers solutions to improve policy frameworks and promote a level playing field in order to stimulate higher and more inclusive growth.

Telecommunications, which are tightly interconnected with the rest of the economy, demonstrate how improved competition could help stimulate investments by operators, which could help lower cost and improve penetration of both fixed and mobile services. The case of lychee and vanilla shows how lower barriers to entry in key export markets could boost opportunities for smallholder farmers and their participation in value addition.

Recommendations include reinforcing competition laws and strengthening their enforcement by independent regulators and encouraging best practices for firms and private sector associations.