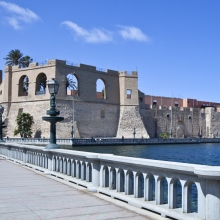 The World Bank in Libya

The World Bank is committed to continue to support Libya with technical assistance and analytical services. The support builds on the Country Engagement Note (CEN). The program was subsequently adjusted to reflect security and political developments.

Libya: Commitments by Fiscal Year (in millions of dollars)*

Find out what the Bank Group's branches are doing in Libya.