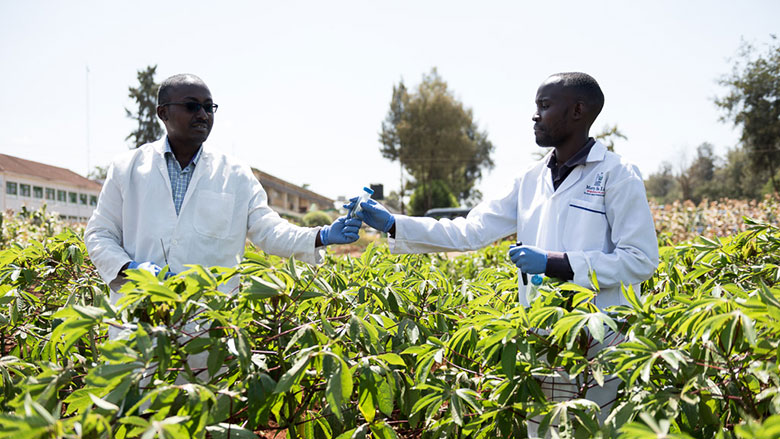 Agricultural researchers from the Kenya Agriculture and Livestock Research Organization (KALRO) have been working to produce drought-resistant crops to maximize crop outputs for smallholder farmers in Kenya’s rural areas.

NAIROBI, April 8, 2019 – Kenyan households that are exclusively engaged in agriculture contributed 31.4% to the reduction of rural poverty, and agriculture remains the largest income source for both poor and non-poor households in rural areas, according to the latest World Bank economic analysis.

The 19th Kenya Economic Update, Unbundling the Slack in Private Investment, says agriculture is a major driver of growth for the Kenyan economy and is the dominant source of employment. From 2013-2017, the report notes the agriculture sector contributed on average 21.9% of gross domestic product (GDP), with at least 56% of the total labor force employed in agriculture in 2017.  Agriculture is also responsible for most of the country’s exports, accounting for up to 65% of merchandise exports in 2017. As such, the sector is central to the government’s Big 4 development agenda, where agriculture aims to attain 100% food and nutritional security for all Kenyans by 2022.

Despite progress towards achieving food security for all Kenyans, the analysis finds that real agricultural value-added has declined relative to levels attained in 2006. This was due to weather related shocks, prevalence of pests/disease and dwindling knowledge delivery systems such as the lack of extension services on adoption of modern technology.

The report recommends policy reforms that could help transform the sector and deliver on food and nutritional security, including: