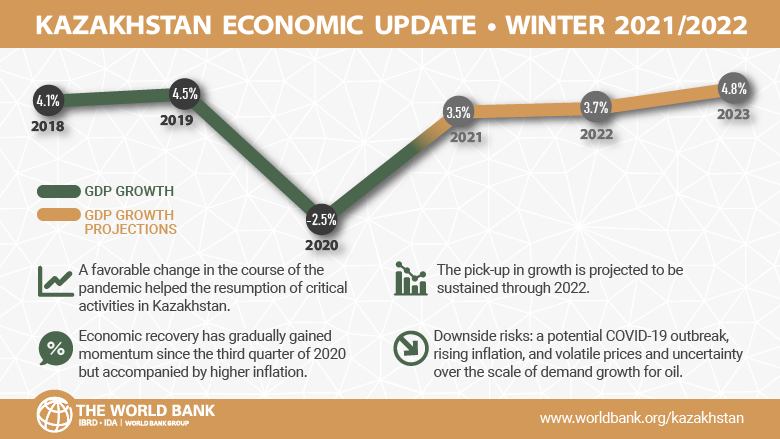 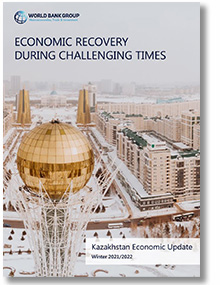 The Kazakhstan Economic Update is a semi-annual report that analyzes recent economic developments, prospects, and policy issues in Kazakhstan. The report is prepared based on the data and information available through December 2021. Thus, this edition does not reflect the economic impacts of the events which took place in the country at the start of 2022. The World Bank will update its projections by April 2022. The next edition of the Economic Update will be released in summer 2022.

After suffering a pandemic-driven slump in 2020, strong growth in aggregate demand supported real GDP. However, in 2021 inflation surged to its highest recorded level since 2016, driven mostly by food price inflation and prolonged disruptions in global supply chains. The inflation rate exceeded the central bank’s target range and prompted a tighter monetary policy stance.

The government’s countercyclical fiscal stance to support economic recovery is appropriate. In 2021, the government introduced a supplementary budget that included additional spending on healthcare, support to SMEs, and infrastructure projects. Despite additional fiscal support measures, higher oil and non-oil revenues will result in narrower budget deficit.

As of December 2021, the pick-up in growth was forecast to be sustained through 2022. Real GDP growth was projected to be around 3.7 percent in 2022, although the economy was expected to remain below the pre-pandemic baseline path for the entire forecast horizon.

The COVID-19 continues to be represent a key short-term risk. A more effective vaccination campaign and improvements in controlling the spread of the virus have become key short-term priorities. By the end of 2021, despite smaller population, only 45 percent of population was fully vaccinated, lower than in many developed economies. Without higher coverage, the reintroduction of containment measures would be needed, which could hamper growth and delay the projected recovery.

Special Focus: The Challenges of Climate Change for Kazakhstan

The country is approaching a critical juncture in transitioning to a greener and more sustainable economy. At the 26th United Nations Climate Change Conference of Parties (COP) in Glasgow, Kazakhstan reaffirmed its commitment to achieving carbon neutrality by 2060 as part of the global effort to curb rising temperatures. On the one hand, the commitment opens opportunities for climate adaptation and renewable energies. On the other hand, Kazakhstan’s fossil fuel-dependent economy will face pressure from the green transition agenda. Therefore, a broad set of policies is needed to help Kazakhstan adapt, mitigate climate shocks, and support the transition to a low carbon economy, including supporting economic diversification. The transition will require measures to support a just transition for affected workers and communities, to minimize the impact on jobs and income of low-income households.