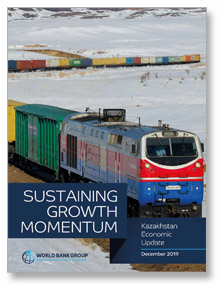 The winter 2019 edition of the biannual Kazakhstan Economic Update outlines the economic situation in the country, as well as the medium-term development prospects.

Recently, the economy expanded, amid a slacking external environment. Global economic growth appears to have slowed to a projected 2.6 percent in 2019, constrained by subdued international trade and investments. Average growth of Kazakhstan’s major trading partners, which include the EU, China, and Russia, declined to 1.7 percent in 2019 from 3 percent in 2018.

The weak environment in global trade and lower oil prices have negatively affected Kazakhstan’s exports and edged up the current account deficit to 2.4 percent of GDP.

Policy stimulus has helped domestic demand, but structural weakness is constraining the economy from expanding further. An increase in fiscal spending is expected to increase the government non-oil budget deficit to about 8.6 percent of GDP in 2019, higher than 7.6 percent last year.

Policies included the government taking over the debt service of 443,000 citizens and raising social spending to 5 percent of GDP in 2019, from 4.4 percent in 2018. Subsidized loans for housing continued, although at a lower volume than in previous years.

As increase in domestic demand widened the current account deficit and pushed up inflation; however, the National Bank of Kazakhstan’s (NBK’s) move to control inflation helped improve macroeconomic stability. Nevertheless, growth in the real sector is largely limited to non-tradeable services including construction, trade, and transport services, while lower prices and output weakened the performance of the oil sector.

Corporate lending by the banking sector continues to sag, reflecting a conflation of low demand from corporations and risk aversion by banks. Although reported financial indicators show banks have high capitalization levels, non-performing loans in the banking sector are likely higher than the official figure. 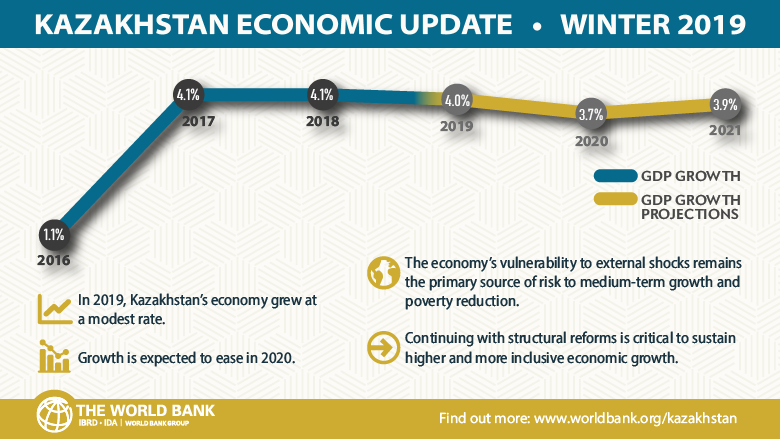 Growth is expected to ease in 2020, with greater risks from the external environment and vulnerability to shocks. The economy is projected to grow by 3.7 percent in 2020, as the impact of fiscal stimuli is likely to diminish.

Global economic growth is expected to improve slightly in 2020, but worse-than-expected growth in the European Union (EU), China, and Russia could rattle demand and the prices of commodities relevant to Kazakhstan’s exports. The recent forecast also suggests that global commodity prices are likely to soften on the back of ample supplies and weak global demand.

Against a backdrop of weakness in the banking sector and the limited prospect of a surge in economic growth in the medium term, the continued expansion of retail loans can increase the downside risks to the economy.

Although Kazakhstan’s current GDP growth is higher than half of all other countries at similar levels of development, addressing structural weaknesses is imperative for the economy to join the ranks of the world’s 30 most developed economies by 2050.

Trade plays an important role in Kazakhstan’s development, and the country is well-positioned to benefit from the growing markets of China, Europe, and Central Asia.

Trade offers opportunities for Kazakhstan’s economic growth and for diversifying away from oil. But, to benefit from these opportunities, Kazakhstan needs further cross-cutting reforms such as improvement in transport logistics, trade facilitation, and the functioning of factor markets (finance, land, and labor).

Therefore, understanding current developments and challenges in exports is important to inform policy to improve export competitiveness of non-resource products.

The special topic section of this report highlights the fact that, although Kazakhstan has made progress in diversifying its export destinations, product quality outside commodities is still relatively low. OECD data on trade in value-added indicates that Kazakhstan’s exporters used fewer imported inputs compared to a decade earlier, which suggests a declining participation in global value chains.