Kazakhstan’s Economy is Rising – It is Still All About Oil 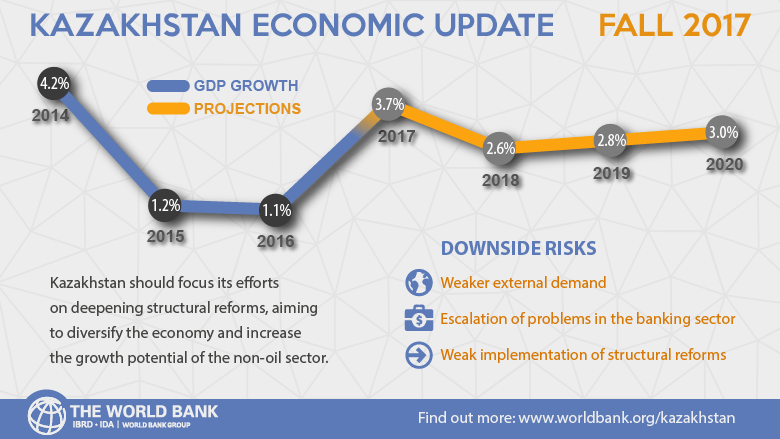 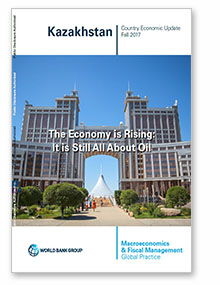 The fall 2017 edition of the biannual Kazakhstan Economic Update outlines the economic situation in the country, as well as the medium-term development prospects.

The Economy is Rising: It is Still All About Oil — Download full text (PDF)

As Kazakhstan’s economy started to recover from the crisis caused by the fall of global oil prices, real GDP grew by 4.3% year-on-year (Y-o-Y) in the first nine months of 2017, compared to 0.4% in the same period of 2016.

The oil sector was the main driver of economic growth, as oil output increased by 12.5% Y-o-Y in the first nine months of 2017 due to the launch of production at the long-awaited off-shore oil field Kashagan in October 2016.

More favorable terms of trade—as oil prices increased by 24% Y-o-Y in the first nine months of 2017—also contributed to better performance of the oil sector. Additionally, the construction sector rebounded due to new large capacity expansion projects in the oil sector.

The non-oil economy also expanded, on the back of more dynamic activity of the manufacturing, agriculture, transport, and trade sectors.

On the external balance side, while higher external demand and more favorable terms of trade led to an improvement in the trade balance, net foreign direct investment inflows decreased substantially, putting pressure on the tenge.

Although the National Bank of Kazakhstan (NBK) started cutting gradually its policy rate from 12 percent at the beginning of 2017 to 10.25 percent in August 2017, later in the year, it stopped loosening monetary policy further due to higher pressures on the tenge and domestic prices.

The government continued its fiscal consolidation program by cutting the nonoil deficit further, excluding a one-off transfer for a bank bailout program.

In the third quarter of 2017, the government injected the equivalent of US$6.5 billion (about 4 percent of GDP) into the Problem Loans Fund to accelerate the recovery of banks’ balance sheets; the NBK provided an additional US$2 billion (1.3 percent of GDP) to support ailing banks.

The growth estimate for 2017 has been revised upwards from 2.4% to 3.7%, reflecting the strengthened external environment, the resulting better-than-expected oil sector performance, and improved domestic demand—which has supported growth in the nonoil economy.

Over the medium-term, the GDP growth rate would hover around 3% a year, as the oil sector’s contribution to economic growth declines relative to 2017.

Going forward, if the implementation of structural reforms is successful, it will assist in the diversification of the economy and would raise Kazakhstan’s growth potential. The ongoing structural and institutional reforms under the 100 Concrete Steps program and the privatization agenda aim to reduce the role of the state in the economy and facilitate the development of a vibrant, modern and innovative tradable non-oil sector.

Furthermore, efforts to restructure and privatize state-owned enterprises (SOEs) would be expected to seek raising efficiency in public administration and reducing fiscal risks.

Prudent fiscal and monetary policies would support economic and price stability and encourage investments in the non-oil economy. Higher incomes will also have positive spillovers on poverty reduction.

The expansion of the private sector will lead to job creation, income growth, and poverty reduction.

Private-sector-led growth, however, is hampered by various factors, such as the dominance of SOEs in the economy, the lack of skilled labor, some sector-specific challenges, macroeconomic vulnerabilities, as well as weak regional economic cooperation.

To support the development of vibrant tradable nonoil sectors, the authorities should maintain prudent macroeconomic policies, make progress in deepening structural and institutional reforms, and continue investing into human and physical capital.

Kazakhstan Economic Update, Fall 2017 – The Economy is Rising: It is Still All About Oil