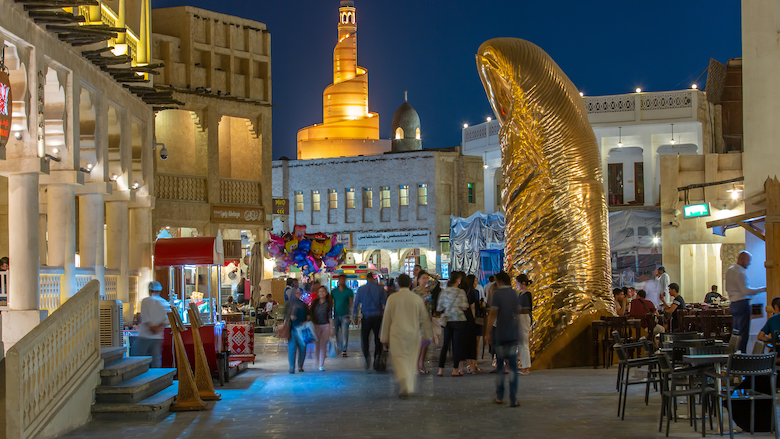 Growth slowed to 1.5% in 2018, and the weakness persisted in the first quarter of 2019, with GDP expanding by a modest 0.9% year-on-year (y/y). Slower growth reflects a gradual winding down of a decade-long boom associated with the implementation of large infrastructure projects in preparation for the FIFA 2022 World Cup. Additionally, hydrocarbon activity has been flat in recent years reflecting a decade-long self-imposed moratorium on the North Field, the world’s biggest natural gas field (now ended). The non-oil sector expanded by just 1.6% y/y in Q1 reflecting soft service and manufacturing sector growth and a contraction in the construction sector, which accounts for about a fifth of non-oil activity. While the economy has coped well since the mid-2017 diplomatic rift with some GCC neighbors by accessing new import and export routes, inward foreign direct investment has dropped off sharply. A new draft foreign investment law approved in 2018 seeks to allow foreigners to own 100% of the capital of companies across all economic sectors, the first GCC country to do so. This follows permanent residency reforms aimed at attracting highly-skilled foreign workers to help Qatar become a knowledge-intensive economy.

Growth is projected at 2.0% in 2019 as government spending increases, and to rise to over 3% in the medium term driven by stronger activity in the service sector as the FIFA World Cup draws nearer. Under the Qatar National Vision 2030, nearly QR60 billion (US$16.4 billion) in infrastructure and real estate investments are planned over the next four years to help offset falling FIFA-investment spending. Qatar is also rapidly moving forward with large-scale LNG capacity expansion plans, which should increase gas liquefaction capacity by more than a third.