Impacts of COVID-19 on Household Welfare in Tunisia 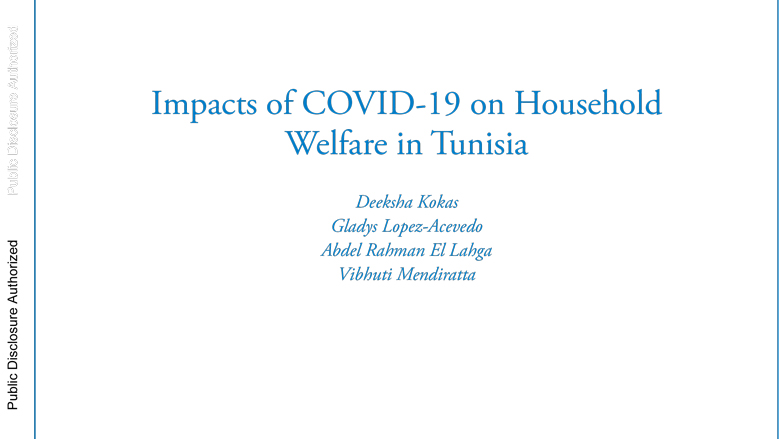 How is COVID-19 affecting the poor? Recent analysis carried out by the World Bank addresses this question by estimating the pandemic’s impact on Tunisia’s poor households. It shows that the pandemic is likely to reverse recent gains in poverty reduction.

There are four broad channels through which the pandemic could affect households: labor income, non-labor income, direct effects on consumption, and the disruption of services. However, the analysis only focuses on the labor and consumption channels. The findings suggest that, under the baseline scenario of 8.8 real GDP growth, at constant factor prices, poverty is estimated to increase from 2.9 percentage of the population pre-Covid to 7.4 percent in 2020. Additionally, inequality (measured using the Gini coefficient) is estimated to increase from 37 to 39.5.

Households with per capita consumption in the poorest 20 percent of the population, which are concentrated in Tunisia’s Center West and South East regions, would be hardest hit. As for the most vulnerable individuals, they are likely to be women, living in large households, without access to health care and employed without contracts. Just over half (53 percent) of individuals who projected to have fallen into poverty as a result of the pandemic are likely to be employed without a contract.

The analysis also simulated the impact of the authorities’ compensatory measures and found that they would mitigate the impact on poverty. Specifically, the increase in poverty would slow to 6.9 percent with the mitigation measures as opposed to 7.4 percent without, underlining the importance of developing well-targeted social protection programs that can quickly be used to reach the poor at times of crisis.

These findings show that, going forward, it would be extremely important to ensure that economic growth benefits the poor and thus be inclusive. Fostering jobs as well as alternative livelihood mechanisms in the regions and areas that have been left behind may be important to consider. The additional shock introduced by COVID-19 is expected to increase Tunisia’s poverty rate and inequality. This bunching of the population just above the poverty line has key implications in the face of a high risk that the country faces in the future. Many households could fall back into poverty due to environmental or economic shocks. Thus, mechanisms to protect this large vulnerable subgroup should be a top priority.