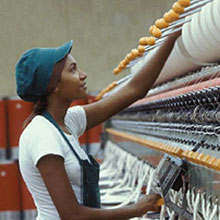 The World Bank In Costa Rica

Costa Rica is a development success story in many aspects. Considered an upper middle-income country, Costa Rica has experienced steady economic expansion over the past 25 years, but the COVID-19 pandemic, among other factors, challenges these achievements

Costa Rica: Commitments by Fiscal Year (in millions of dollars)*

Find out what the Bank Group's branches are doing in Costa Rica.