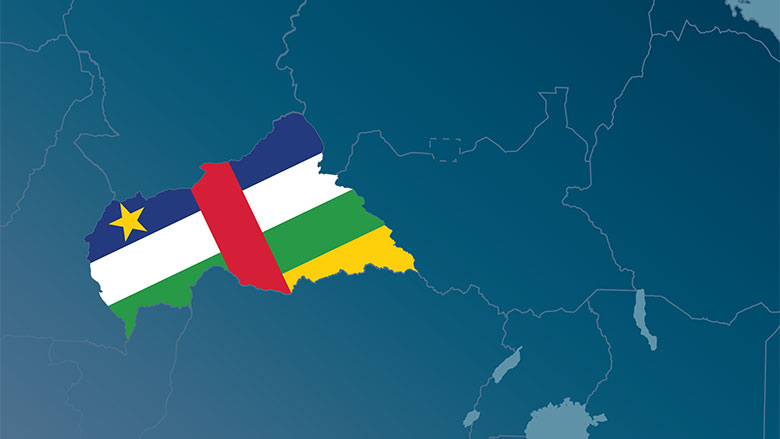 According to the second economic update for the Central African Republic (CAR) published on January 23, 2020 by the World Bank, the economic outlook for 2019 and 2020 is positive despite risks and uncertainty related to the fragile security situation and the implementation of the peace agreement. The study also proposes options to modernize and strengthen domestic resource mobilization, which remains critically low to meet the growing needs of its people.

1. Economic growth rebounded in 2019 with the signing of the peace agreement

After slowing at 3.8% in 2018, the annual Gross Domestic Product (GDP) growth rebounded to 4.8% in 2019 as the signing of the peace agreement in February 2019 stimulated economic activities. Inflation increased from 1.6 in 2018 to 3.2 in 2019, and the external position improved with the rise in official transfers. Although the economy has grown faster than that of the countries of the Economic and Monetary Community of Central African States (CEMAC in French) and sub-Saharan Africa, it is still lagging behind comparable countries (known as structural peers, such as Burkina Faso, Malawi, Mali, Niger, and Uganda) and countries that have had a development trajectory that can serve as an example (known as aspirational peers, such as Rwanda).

2. Revenue per capita has halved in CAR since 1960, in real terms

Although in 1960, real GDP per capita was twice as high in the CAR as in Rwanda, it is now twice as low. The study notes that the country has not experienced a period of sustained growth since independence, due to a succession of recessions due to armed conflicts and coups d'état. The 2013 crisis was particularly harmful. Poverty remains pervasive, with nearly 3.4 million people – 71 percent of the population – living below the international poverty line (US$ 1.90 per day, 2011 PPP) in 2018. CAR's economic outlook is positive, however, thanks to the signing of the Political Agreement for Peace and Reconciliation in February 2019, and forecasts growth of 4.8% in the medium term.

3. Public debt continues to decline as a result of fiscal consolidation efforts

According to the report, public debt increased from 69.2% of GDP in 2014 to 48.5% in 2018. Although, CAR still presents a high risk of debt overhang, its efforts to rationalize public expenditure and resolve domestic arrears have enabled it to post better public debt trends than CEMAC and sub-Saharan African countries on average and to come closer to the debt levels of its peers. Going forward, the Government intends to continue on this path by rationalizing public expenditure and monitoring the recruitment of civil servants for more efficient management of the wage bill. 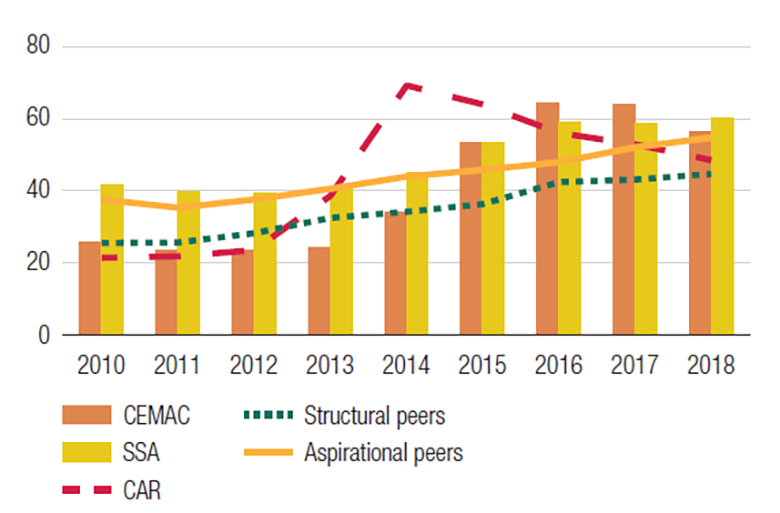 Source: World Bank calculations based on data the Ministry of Finance and Budget, IMF and World Bank

4. To meet the growing needs of its people, CAR needs to increase revenue from taxes, which are about 4% below of GDP potential

The government has limited capacity to deliver basic services due to inadequate funding in social sectors and is significantly lower than all comparators. For example, the education sector budget is low and highly reliant on donor financing.  As of 2016, public spending in education represents only 1.3% of GDP, which is far below the recommended best practice levels of 4 to 6% of GDP by the Global Partnership for Education. This situation did not change much over time. CAR’s tax revenue is 4 percent of GDP below potential and under their pre-crisis level due primarily to the low tax base and tax effort, inefficient tax administrations, and pervasive informal sector. Strengthening domestic revenue mobilization will support basic public goods and services provision, support economic growth, and reduce the government's debt burden.

The report provides detailed recommendations to increase domestic revenue collection by improving tax and customs policies and administration. It recommends, among other things, broadening the tax base, tapping on property taxes, which could generate close to CFAF 12 billion (about $22 million), reducing tax exemptions, which amounted to CFAF 2.4 billion (about $4 million) in 2016 and modernizing tax administration, increasing tax compliance efforts and learning from peers. Implementing reforms to reduce tax exemptions and improve the business environment to attract private investment will require a strong commitment from authorities.

6. Mobilizing domestic resources is critical, not just as a way of raising government revenue but also as a means of shifting the country into a virtuous cycle of peace and security

Boosting domestic revenue collection will help the CAR to finance the protection of persons and property, the basis of the social contract between the State and the population. Peace and security – essential pillars of long-term development – will provide incentives for taxpayers to pay their taxes and strengthen business and household confidence, which is essential for good economic performance and poverty reduction. 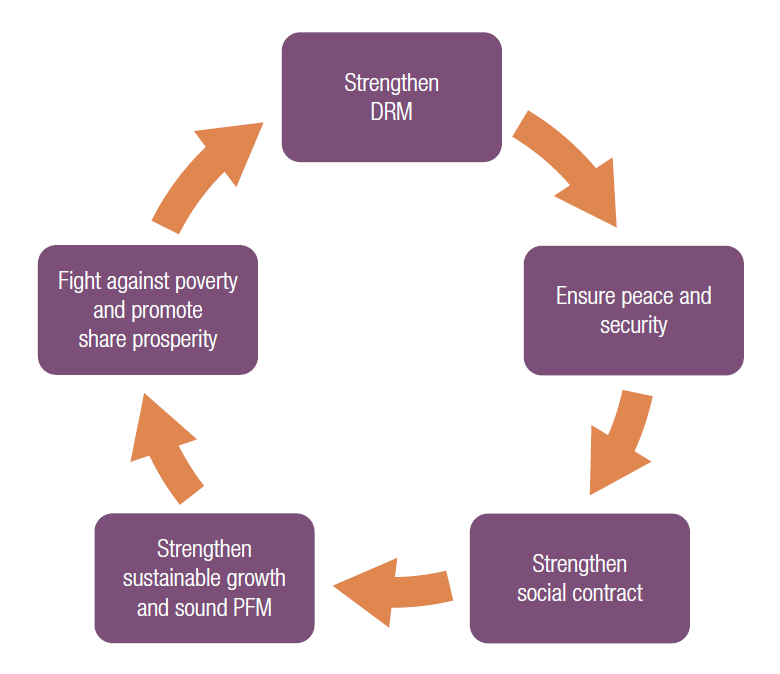