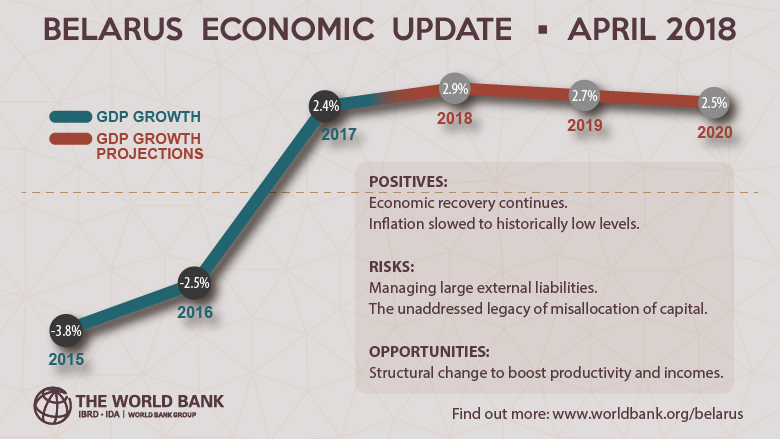 In 2018, the expansion continued: GDP growth accelerated to 5.6 percent y/y in January-February 2018, with the main contributions from industry (2.7 percentage points) and domestic trade (0.9 percent) due to strong domestic demand growth.

An increase in public investment, especially in selected regions of Belarus, supported a recovery of investment activity—gross fixed capital formation is up by 5 percent in real terms, compared to a decline by 14.5 percent in 2016.

Inflation slowed to historically low levels, helped by better anchored inflation expectations, and moderation in administrative price adjustments. Annual average inflation slowed to 6.0 percent in 2017, and to 5.4 percent y/y in March 2018. As inflation pressures stabilized, the National Bank cut its benchmark rate from 17 to 10.5 percent during 2017, leading to an almost twofold reduction in nominal lending rates in national currency.

As a result, the supply of new credit in national currency went up by almost 43 percent in nominal terms in 2017. The stock of credits to the household sector grew by 26.2 percent y/y in 2017 on the back of real wage growth and interest rate reduction.

Dollarization remains at elevated levels, 69 percent of deposits and 54.5 percent of corporate loans, while the national currency components of M3 account for just 11.5 percent. The Non-Performing Loan (NPL) ratio in the banking system has stabilized around 13 percent, down from its peak of 14.9 percent in November 2016.

Quasi-fiscal expenditures continue to put pressures on public debt levels, and external financing needs remain large. In 2017, the narrowly defined state budget (excluding quasi-fiscal operations) was in surplus (3.2 percent of GDP), which was spent on repaying and servicing public debt in foreign currency (US$3.26 billion, or 6.9 percent of GDP).

Having increased rapidly in 2015, gross public debt remained high at 47.5 percent of GDP in 2017. Debt-service pressures were partially eased by the disbursement of the three tranches of the EFSD loan (totaling US$800 million), disbursement of a bilateral loan from Russia (US$710 million), the issuance of Eurobonds – US$1.4 billion in June 2017, and US$600 million in February 2018 and domestic bonds – US$450 million.

Pressures on external accounts eased due to increased surpluses in trade in services and secondary income. After declining for four years in a row, merchandise exports recovered- an increase by 24 percent y/y in nominal US$ terms. However, the merchandise trade deficit expanded slightly to 5.4 percent of GDP in 2017 (vs. 5.2 percent in 2016) driven by imports of intermediate and consumption goods.

Gross international reserves increased to US$7.3 billion in 2017, covering up to 2.4 months of imports of goods and services. However, the net international investment position remains negative, totaling US$ 41.5 billion, or about 76.3 percent of GDP as of January 1, 2018.

The medium-term economic outlook remains challenging due to high foreign exchange financing needs and domestic structural bottlenecks. While moderate recovery will continue to be supported by gradually improving domestic and external demand conditions, economic growth rates are unlikely to exceed 3 percent due to supply-side constraints. Low growth rates will lead to widening of income per capita gaps between Belarus and its neighbors, as the economies of the Baltic States and Poland are projected to grow on average above 3 percent per year. Modest growth would ease balance-of-payment pressures, maintaining the current account deficit between 2 and 3 percent of GDP.

The outlook has significant downside risks related to changes in the external environment.

First, although the current account deficit has declined, public debt remains high – likely to remain close to a half of GDP in the medium term. The majority of gross external debt pertains to the public sector and is characterized by a heavy debt repayment profile in the medium-term. As the public debt is largely denominated in foreign currency, there is a risk of disorderly adjustment in the external imbalance due to a tightening of global financial conditions.

Second, any deceleration or volatility of economic activity in Russia (including volatility associated with the recent sanctions against selected Russian corporations) may influence the Belarus’s economy through several channels: (i) volatility of the Russian ruble exchange rate may trigger BYR/US$ fluctuations, could undermine consumer confidence and lead to higher demand for foreign currency in Belarus; (ii) depreciation of the Russian ruble against the US$ may weaken the price competitiveness of Belarusian enterprises on the Russian market, (iii) and any increase in Russia’s borrowing costs could also imply a higher cost of borrowing for Belarus.

Any of these developments would make it harder for the government to generate the foreign currency needed to service its foreign exchange-denominated sovereign debt. In 2018, only the Ministry of Finance alone will allocate US$3.8 billion for public debt repayments and service in foreign currency (or about 5.4 percent of forecasted GDP).

Expansionary policies of the past and the unaddressed legacy issue of misallocation of capital present downside risks from domestic factors. These are related to a possibility of a disorderly unwinding of financial sector imbalances if mechanisms for addressing insolvent SOEs and NPL resolution are not put in place. In addition, there are risks to fiscal sustainability arising from existing quasi-fiscal deficits related to the excessive expansionary policies of the past.

The impact of lower interest rates is limited, as highly indebted enterprises are unable to invest more, while high dollarization reduces further the maneuverability of monetary policy.

Improvements in capital allocation and an orderly unwinding of large external liabilities are needed for a more sustainable growth trajectory. Over the last decades Belarus has managed to accumulate large assets of physical and human capital. However, the accumulation of physical capital has coincided with a deterioration of the country’s net foreign asset position. A Special Topic Note discusses key aspects of wealth accumulation process, both from the ‘real sector’ and finance sector’s perspective.