Skip to Main Navigation
This page in:_
publication November 6, 2018 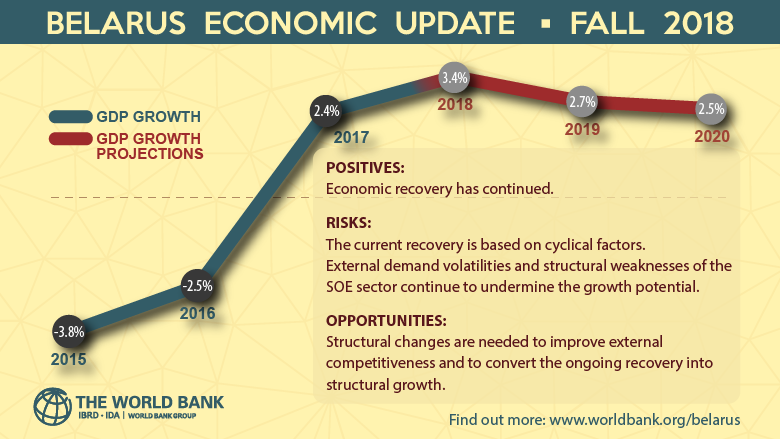 Belarus’s cyclical economic recovery has continued, led by growth in consumption and exports. Stronger domestic demand and increased exports helped GDP growth accelerate over six straight quarters to 3.9 percent by the second quarter of 2018. Real wages rose, outpacing productivity growth throughout the second half of 2017 and during 2018, fueling household consumption, which grew by 10.2 percent year-on-year (y/y) in the second quarter of 2018.

Rapid increases in capital spending by local governments (during 2017-18), and in bank lending, reinvigorated investment, which expanded by 7 percent in the second quarter of 2018. As a result, the contribution of domestic demand to GDP growth exceeded that of net exports, which turned negative due to an increase in imports.

On the supply side, growth was driven by a rebound in commodity-intensive industries. More favorable terms of trade with non-CIS countries helped exporters of mineral products, metals and wood to increase both volumes and revenues. In contrast, a mild and volatile recovery in Russia created limited opportunities for increasing exports of manufacturing and agricultural products.

Also, bilateral import restrictions periodically imposed by Russia adversely affected the exporters of dairy products. Meanwhile, financials of the corporate sector continued to deteriorate. In the first half of 2018, profits in manufacturing and construction fell in real terms, while the number of loss-making State-Owned Enterprises (SOEs) in these sectors decreased only marginally.

Nonetheless, commercial banks increased lending to corporates in manufacturing, at a pace close to sectoral output growth, despite high indebtedness levels in 2017 (the ratio of assets subject to credit risk to gross sectoral value added amounted to 69.4 percent) and a higher share of assets subject to credit risk, at 22.6 percent, compared to other key sectors of the economy.

Consolidated government revenues recorded real growth due to robust tax revenues. To meet rising (by 2.4 percent in real terms in the first half of 2018) public debt payments, spending on public investment and transfers to local budgets were reduced, to generate a headline fiscal surplus of 5.5 percent of GDP (net of quasi-fiscal expenditures). However, public debt pressures remain, as the public debt to GDP ratio amounted to 36.8 percent by the second quarter of 2018. If an extended definition of external public debt is applied, the public debt to GDP ratio reaches 51.2 percent.

To maintain single-digit inflation, the National Bank continued monetary targeting. Annual average inflation slowed to 6 percent in 2017, and further to 5.6 percent by September 2018, although accelerating from 4.7 percent by the first half of 2018. As inflation pressures stabilized, the benchmark interest rate was steadily cut during 2017-2018, from 17 to 10 percent by June 2018. As a result, lending rates fell, improving loan supply conditions and stimulating bank lending, which grew by about 11.5 percent in nominal terms y/y by mid-2018.

Still, the degree of dollarization remained high, with 67.2 percent of deposits denominated in foreign currency, while the share of the currency component of broad money went down, from almost 66 percent to 62 percent by the second quarter of 2018. However, the economy-wide ‘problem asset’ level at 13 percent (as of April 1, 2018) remains a concern.

The current account deficit narrowed substantially in 2017 before rising again in 2018. It fell to 1.7 percent of GDP from around 3 percent in 2015-2016, as more favorable terms of trade contributed to a growing value of goods and services exports. This factor, along with the continued net sale of foreign currency by households, helped maintain a stable nominal exchange rate until external market factors, such as the falling Russian currency, began to affect its dynamics.

During August-September 2018, the Belarusian ruble depreciated in nominal terms by 8 percent vis-à-vis the US$. Foreign borrowing by the public sector and oil trade-related transfers to the budget helped address short-term financing needs. In the first half of 2018, the current account deficit rose back to 2.9 percent of GDP, covered by net FDI (4.4 percent of GDP).

Gross international reserves, after increasing to US$ 7.3 billion in 2017, remaining at US$ 7.2 billion by September 2018, with still limited coverage of two months of imports of goods and services. The net international investment position remains negative, totaling US$ 41.5 billion, or about 76.3 percent of GDP as of January 1, 2018, and deteriorating slightly to almost US$ 42 billion by mid-2018.

The pace of GDP growth is projected to decelerate to 2-2.5 percent in 2019-2020 as the current recovery is based on cyclical factors. As base effects gradually dissipate, slower output growth in manufacturing and other key sectors, along with lower growth in non-tradable sectors (driven by a gradual deceleration of wage and income growth), will put downward pressure on economic growth. If prudent fiscal and monetary policies continue to support exchange rate flexibility and single-digit inflation, private sector activity could gradually expand, supported by recent improvements in the business environment.

The fiscal position is expected to deteriorate in the wake of the ‘tax maneuver’ by Russia – a gradual phaseout of oil duties collected by the government budget and higher input prices for Belarusian oil refineries. The resultant fiscal gap of 3.8 percent of GDP per year, as estimated by the Ministry of Finance, will necessitate public expenditure cuts and measures to increase spending efficiency, especially in the light of upcoming public debt repayments.

In 2018-19, Belarus needs to repay US$ 3.6 billion per annum, and at least half of that will require refinancing. As the economy continues to grow slowly, real labor income growth will remain positive, but labor market weaknesses may persist. These are related to tight financial conditions and the high indebtedness of the SOE sector, which limit productive investment and more efficient use of factors of production, against the background of slow expansion of the private sector. Also, labor migration pressures may arise, as more skilled workers seek jobs in neighboring countries.

Both external and domestic factors present risks to the medium-term economic outlook. The economy’s public debt position, at close to 40 percent of GDP, remains the main challenge to achieving stable and sustainable development. Economic performance will depend critically on global commodity prices and external demand from Russia.

While bilateral negotiations with Russia – one of the major creditors – have helped to obtain necessary external financing, this provides only short-term relief. Domestic risks include the slow pace of implementation of necessary reforms in the real sector and a return to expansionist policies to support domestic demand, especially in the run-up to the parliamentary and presidential elections.

A potential escalation of interlinked problems in SOEs and commercial banks is an area of concern. To mitigate these risks, more systemic measures, such as putting in place a workable Non-Performing Loan resolution framework to bring down the economy-wide ‘problem assets’ level from current 13 percent, are needed. Continued case-by-case debt rescheduling of SOEs’ debts might increase fiscal risks, due to over-optimism about the prospects of poorly performing enterprises.

The main challenge is to find ways to convert the ongoing cyclical recovery into structural recovery. Long-run growth depends on the efficiency with which resources are allocated, the ease of doing business, the incentives for investment and confidence in public institutions.

Making strides in these areas will address the ongoing adjustment difficulties and prevent secular stagnation. Structural economic and technological changes often lead to increasing social tensions, but these can be mitigated by appropriate policies and institutions.

A special focus note on Addressing Distributional Inequalities discusses the rise of distributional tensions in Europe and Central Asia, including intergenerational and spatial divides, which are also observed in Belarus. Growing economic insecurity can be addressed by redesigning the coverage of social assistance programs, along with reliance on growth-promoting, spatially blind economic policy measures.