Common Red Flags of Fraud and Corruption in Procurement 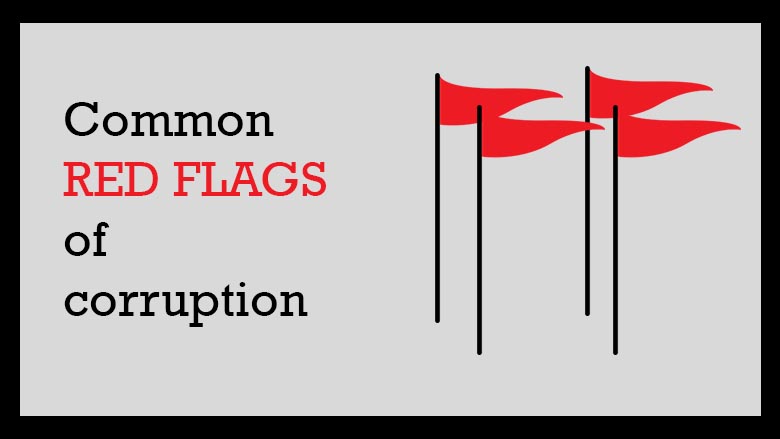 "Red flags" are indicators of potential issues regarding governance failure, collusion or corruption in projects. The following is a list of common red flags of fraud and corruption in procurement:

Any complaint from bidders and other parties

Complaints are a vital source of information about fraud and corruption in Bank-financed projects. Many complaints, while not mentioning the words fraud and corruption, upon investigation often lead to the discovery of such misconduct. For example, a complaint about missing or defective materials could indicate low capacity, but it could also indicate that in exchange for bribes, defective materials were accepted. Complaints can relate to any type of scheme or risk.

Often in corruption or fraudulent schemes the perpetrators endeavor to avoid higher level review or competitive bidding. To this effect, they often tailor a contract to fall just under the procurement threshold, or seemingly arbitrarily split a contract into several smaller contracts to accomplish that purpose.

INT investigators have found additional indicators such as bidders that have identical last names, addresses, fax, telephone numbers; or bids that have sequential bid security numbers indicating they were purchased by one individual. A close review of the bid documents could reveal the use of the same type face or letter print styles, the same spelling mistakes, etc.

In some industries or geographic areas where collusive bidding is more prevalent, bid prices are often  30% or more above the government estimate.

Seemingly inflated fees of agents or prices of goods

Fees can be used to disguise corrupt payments. These fees often take the form of the involvement of an unnecessary middleman (otherwise known as broker, agent or facilitator). INT has found two scenarios which occur in Bank-financed projects:

These fictitious companies, also called front or shell companies, have no substantial assets or permanent business facilities; often they are not registered or listed in business or telephone directories.

Lowest evaluated bid is unjustifiably declared non-responsive This red flag can indicate bid rigging. Project officials with a hidden interest in a contractor, or expecting to receive kickbacks from a contractor (sometimes on behalf of other government officials) often pressure Bid Evaluation Committee members to declare the lowest evaluated bid(s) unresponsive, thereby allowing the award of the contract to their preferred contractor, who often offers a much higher price and/or is only marginally qualified.

Requests for an exception to the approved procurement plan to allow for the awarding of contracts to a single bidder should be closely reviewed. Often, these requests are made for so called reasons of “urgency.” The contracts being sought are awarded on the basis of false justifications or they are split into multiple contracts, in order to bring their value under procurement thresholds.

A change to the initial contract in the amount or type of services, and/or an increase in price from what was bid before the contract is signed, should be reviewed carefully. Profits can be generated by unjustifiably increasing the price and/or quantity of the services between the time the contractor is selected and the signing of the contract through a change in scope, (participation of) key personnel, manufacturing unit rates, or the General Conditions of Contract (GCC). In addition, once the contract is implemented, the contractor could substitute services by those of lesser value, quality and/or not use the agreed man hours.

Multiple change orders to the contract

Goods/Services are of low quality or not delivered

INT investigations and Detailed Implementation Reviews have demonstrated that in most cases low quality or undelivered goods, works or services is a strong indicator of fraud and corruption.

When a contractor uses bribes and kickbacks or colludes with other bidders to procure a project, these illicit costs need to berecovered in order to still make a profit. The most common ways to do this are to:

The above is often preceded by a manipulated selection process.