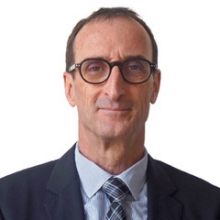 Prior to this position, Mr. Gruber held several interim management positions in the Economic Cooperation and Development directorate of State Secretariat for Economic Affairs (SECO). He was the Chief Negotiator for Switzerland in the founding process of the Asian Infrastructure Investment Bank (AIIB), and he served also ad interim as Delegate of Switzerland in the Development Assistance Committee (DAC) at the Organization for Economic Development and Cooperation (OCDE) in Paris (2014-2016).

From 2008-2013, Mr. Gruber was the Board Director for Switzerland, Liechtenstein, Ukraine, Serbia, Montenegro, Turkmenistan, Moldova, at the Board of Directors of the European Bank for Reconstruction and Development (EBRD), London.

Before, Mr. Gruber worked at the Economic Cooperation and Development directorate, SECO, Bern, Switzerland, first as Head Task Force Kosovo/South Eastern Europe, then as Head of Division of Infrastructure Financing, and lastly as Head of Operations and Deputy Head of the directorate (2001-2008).

From 1997-1999, Mr. Gruber held the Advisor to the Executive Director position at the International Monetary Fund (IMF) and subsequently at the World Bank Group in Washington DC.

Mr. Gruber started his career as a Program Officer, and later Deputy Head of Division, in the Division for Financial Assistance to CIS Republics, Federal Office for Foreign Economic Affairs, Bern, Switzerland (1993-1996).

Mr. Gruber has published in newspapers, journals and is the co-author of a textbook on public economics.