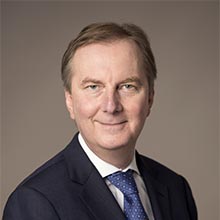 Since joining the World Bank as a Young Professional in 1993, Dr. Koeberle has worked in a variety of countries and regions.

Dr. Koeberle, a German national, joined the Bank in 1993 as a Young Professional and worked as an economist in LCR, ECA and East Asia, including postings in Thailand where he was part of the economic team helping to address the consequences of the East Asia Financial Crisis. He served as Secretary to the Operations Committee and managed the Country Economics unit in the Operations Policy and Country Services (OPCS) Vice Presidency of the World Bank, where he introduced the operational policy on Development Policy Financing.

Subsequently, Dr. Koeberle was appointed Director of Operations Service and then Director of Strategy and Operations in the Latin American and Caribbean Region. He then headed the World Bank’s Jakarta office as Country Director for Indonesia. Upon his return to Washington, he rejoined OPCS to work as the Director of Operations Risk Management where he guided the reform of the Bank’s procurement policy and the establishment of the Environmental and Social Framework. Stefan then became Director for Strategy, Results and Risk in OPCS, where his responsibilities included advising on Bank strategy, operations risk management and results reporting, as well as developing partnerships with other MDBs and development partners. Prior to his current assignment in MNA, Dr. Koeberle was the Director of Strategy and Operations for the Integrity Vice Presidency (INT) of the World Bank Group. During his tenure in INT, Stefan supported the INT VP in managing the VPU, oversaw INT's preventive work and led INT inputs into World Bank Group-wide corporate and operational initiatives.

Prior to joining the World Bank, Dr. Koeberle worked as a post-graduate fellow at the German Development Institute in Berlin.

He holds a Ph.D. in economics from Cambridge University. He has published a number of articles and several books on competitiveness, conditionality and budget support.