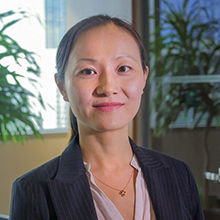 Rong Qian is a Senior Economist at the World Bank in the Philippines. She leads a team that develops programs to help improve the country’s global competitiveness and resilience to natural disasters. She is also the macroeconomics and fiscal management expert behind the Growth and Productivity Report and the Philippines Economic Update, which reviews salient socioeconomic issues and provides growth forecasts twice a year.

Prior to joining the Philippine team, Rong was the country economist for Chile and Nicaragua based in Washington, DC. She specializes in fiscal policy, productivity, and growth—including green growth and its careful regard for the environment.

Rong joined the bank in September 2011. Earlier in her career at the Bank, Rong was doing research on sovereign defaults and financial crises. She was also an intern at the United States Congressional Budget Office and the International Monetary Fund, while completing her Ph.D. in Economics from the University of Maryland.

In addition to Chinese, Rong speaks English and Spanish.