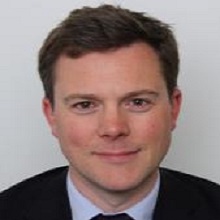 His previous role was Deputy Director for Prosperity and Multilateral Investment in the Treasury’s International Group, overseeing the UK’s bilateral economic relationships with China, India and Brazil, as well as the UK’s shareholdings in the Asian Infrastructure Investment Bank and the European Bank of Reconstruction and Development. He has served as Alternate Director for the UK at both the EBRD (2017-19) and the AIIB (2019-2021). Earlier in his career he worked on a number of international and European issues in HM Treasury and other UK Government departments, including two postings to Brussels at the UK Representation to the EU, working on economic and budgetary issues.

He holds a BA in History and Politics from the University of Warwick.