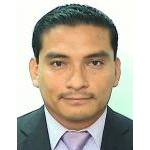 Rasiel Vellos, a Belizean national, is an Economist at the World Bank's Development Data Group. He joined the Bank in May 2012 and oversees the compilation and dissemination of the World Bank/IMF quarterly external debt statistics (QEDS).

Prior to joining the World Bank, Rasiel worked as an Economist for the Central Bank of Belize where he led the Statistical Unit. He holds a master’s degree in Economics from Murray State University, Murray, Kentucky.