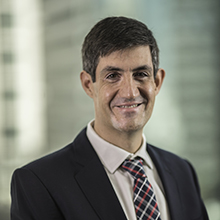 Rafael Muñoz Moreno is the World Bank’s Program Leader for Equitable Growth, Finance, and Institutions (EFI) for Brazil since August 2017.

Mr. Muñoz joined the World Bank in 2005 as part of the Young Professional Program. He has worked in the office of the Vice President of the Economic Department and has served as Country Economist in the Africa region. In addition, he was the Country Economist and Resident Representative in Mauritius and coordinated the World Bank work program with Mauritius and Seychelles. In his previous assignment in the Bank, Mr. Muñoz led the macroeconomic and fiscal policy dialogue between the Government of Malaysia and the World Bank.

Previously, Mr. Muñoz worked in the Spanish Embassy in Tokyo as an Economist and in the European Commission as Operation Officer in charge of budget support projects in Latin America.

Mr. Muñoz holds a PhD in Economics from the University of Louvain (Belgium) and a European Doctoral Program in Quantitative Economic after attending the London School of Economics and Political Sciences. He has published several research papers, mostly on macroeconomic policies, labor economics and business cycles.