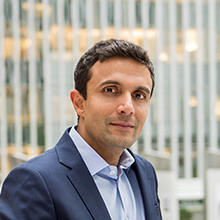 An internationally recognized thought leader and expert in bioclimatic design, Prashant Kapoor is a passionate advocate for solutions that align the interests of developers, financial institutions, governments and homeowners to create more sustainable cities. He is the entrepreneur who created EDGE (“Excellence in Design for Greater Efficiencies”), a universal standard, software application and certification system to mainstream resource-efficient buildings in nearly 140 countries.

Since 2010, Mr. Kapoor has provided dynamic guidance for IFC’s global green building program on both the regulatory and voluntary fronts. Under his leadership, IFC has created a green building portfolio of commercial and residential buildings that totals more than $3 billion, both directly and through financial intermediaries. He has played a critical role in developing national green building codes around the world.

Mr. Kapoor invented IFC’s EDGE green buildings program as a coordinated investment-advisory approach to transform the construction industry in up to 20 markets over the next seven years. The goal is for green buildings to reach a 20 percent market share, which is equivalent to one million cars off the road, and over $300 billion in green investment. Other development finance institutions are currently utilizing the EDGE software for their green building investments, including CDC, Proparco and FMO. Major construction and architectural firms such as Archetype, Bouygues Bâtiment International, Perkins Eastman and HOK have also taken up the clarion call to action.

EDGE was selected as a verification mechanism to provide investor assurance for the Climate Bonds Initiative, which provides eligibility criteria for several categories of climate-related projects, including green buildings. The market for debt instruments that finance projects to help tackle climate change has surged to an estimated value of nearly $350 billion, suggesting an unprecedented opportunity.

Prashant is currently leading the APEX Green Cities Program that supports cities to transition to low-carbon and resource-efficient growth pathways. As a part of the Program, he has developed the APEX online app that allows cities to map out different action plans and evaluate their cost, feasibility, and impact. Under his leadership, IFC has created a green buildings portfolio that totals more than $6 billion.

Prior to joining IFC, Mr. Kapoor worked as a director at WSP consultants in London. There he led the engineering planning of Masdar City, an innovative zero-carbon city under construction in Abu Dhabi, and developed the Dubai Urban Development Framework, including a green building regulatory system for the city.

The scope of Mr. Kapoor’s work at WSP included other sustainable master-planning projects such as Ford Eco-town, a zero-carbon development called Graylingwell, the redevelopment of Alameda Point in San Francisco, and the creation of an eco-tourism masterplan for the Dead Sea. He established a Sustainable Cities League table (on behalf of VIOLA) to benchmark the sustainability performance of European cities, and created a study to explore policy options for Cixi City in China, to help with its transition to a low climate risk economy.