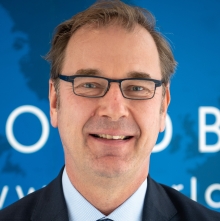 Before taking this position, Martien served for two years as Practice Director of the World Bank’s Agriculture Global Practice, where he oversaw the Bank’s agriculture lending, portfolio and analytic work in the East-Asia Pacific, Latin-America and the Caribbean and South Asia Regions, coordinated collaboration with IFC on agribusiness, and led the Bank’s global engagement on agriculture and climate change.

Martien joined the World Bank in 1993 as a Young Professional and worked initially as an agriculture economist in the Latin-America and Caribbean Region.  He was cluster leader covering agriculture during field assignments in Madagascar from 2001-2004 and in India from 2005-2007.  From 2007 to 2015 Martien worked as Program Coordinator and Sector Manager for Agriculture in various assignments in the Africa Region, including covering Southern and West-Africa.  He was also the Practice Manager for Agriculture in the South-Asia Region, a position he held from 2015-2017.  Prior to joining the Bank, Martien was an associate scientist in the Economics Program of the International Maize and Wheat Improvement Center in Mexico from 1991-1993 and an associate expert in the Dutch bilateral cooperation program in Pakistan from 1989-1991.