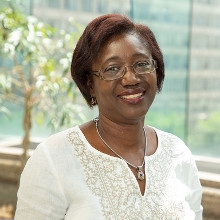 Korotoumou (Koro) Ouattara is Resident Representative for the Republic of Congo (RoC). An Ivorian national, she joined the World Bank in 1998 as a financial economist and worked in the Bank’s Africa Region. In her most recent role, though, Ouattara was a senior financial sector economist in the Competitiveness and Innovation Global Practice of the South Asia Region.

In both Africa and South Asia, she has worked on private sector development and the investment climate, as well as financial inclusion and rural, micro-, small, and medium enterprise, including finance for pensions, insurance, and housing. As the Bank’s focal point for countries including Niger, Bhutan, Sri Lanka, and Bangladesh, she has helped deepen dialogue with the authorities and shaped and expanded the Bank’s business portfolio.

Before joining the World Bank, Koro Ouattara was a researcher at the US’s Ohio State University, where she earned a Ph.D. in Applied Development Economics.