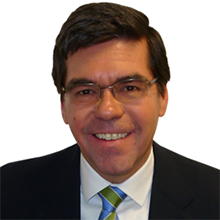 Jaime de Piniés Bianchi is the Client Engagement Manager of the World Bank’s Global RAS Unit.  In previous positions, de Piniés has served as a Lead Economist working in the Macroeconomic, Trade & Investment Global Practice in the MENA region (GCC countries) and has also led regional studies in Latin America and the Caribbean.

Prior to the Bank, de Piniés worked for over 25 years in the private sector both in banking and consulting; including Banco Santander where he was Head of Research, Chase Investment Bank as Chief Economist and Risk Manager and The Global Consulting Group as a Managing Director.  He has also worked in other international organizations, including the IMF and the United Nations, and has taught at The University of Texas at Austin and New York University. In addition, de Piniés has served as a board member of the American Management Association, The Global Consulting Group and Santander Investment.

de Piniés holds a PhD and MA in Economics from Princeton University, a BA from Harvard University and a Law degree from the UNED, Spain.  He has authored numerous articles and books on the economic and business climates.