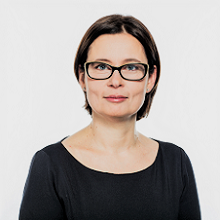 Emilia Skrok is a Program Leader for the Equitable Growth, Finance and Institutions Global Practice. She has been working with The World Bank since August 2004.

Starting July 2002 till July 2004 she was working as the Economist in Economic and Market Research Team, Treasury Department of Bank PEKAO S.A., the largest private bank in Poland. Simultaneously, she worked as Professor Assistant at Warsaw School of Economics, Department of International Comparison Studies teaching class on international comparative economics. From February 1999 until June 2002, she held a position of Senior Economist in Department of Financial Policy, Analysis and Statistics, in Ministry of Finance.

She graduated from Lodz University, Department of Foreign Trade, Major in International Finance. She is interested in creating pieces of art and visiting modern art galleries.