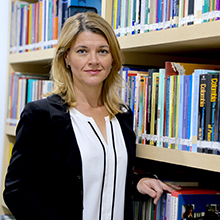 Jutta Kern is Operations Manager for Colombia, Venezuela and Mexico. In this role, she manages the operational portfolio and pipeline development for these countries. A sociologist by training, she is an expert in monitoring and evaluation and has focused on low-income countries with high level of indebtedness and countries in fragile and conflict situations in the past. For the World Bank’s Africa region, she was based for three years in Zambia and Mozambique and has worked in many other countries in Southern, Eastern and West Africa, such as Guinea, Nigeria, Ethiopia, Kenya, Madagascar and Angola.

Previous to joining the World Bank (2007), she dedicated herself to an academic career as Assistant Professor at the University of Vienna with a focus on quantitative and qualitative research methodology, individualization theory, family studies and organizational change. Later, she headed the unit for General Management and Corporate Programs at Danube University Krems in cooperation with the Vienna University of Technology. Starting in 2002, Jutta joined the Office of Science and Technology at the Austrian Embassy in Washington, DC, later as Deputy Director, focusing on science policy and the brain drain. She holds a Doctorate (1997) and a Master’s (1993) degree in Sociology from the University of Vienna, Austria and a certificate in International Development from Middlebury Institute for International Studies at Monterey.