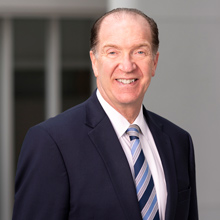 David R. Malpass was selected as 13th President of the World Bank Group by its Board of Executive Directors on April 5, 2019.  His five-year term began on April 9.

Mr. Malpass previously served as Under Secretary of the Treasury for International Affairs for the United States.  Mr. Malpass represented the United States in international settings, including the G-7 and G-20 Deputy Finance Ministerial, World Bank–IMF Spring and Annual Meetings, and meetings of the Financial Stability Board, the Organization for Economic Cooperation and Development, and the Overseas Private Investment Corporation.

In 2018, Mr. Malpass advocated for the capital increase for the IBRD and IFC as part of a reform agenda featuring sustainable lending practices, more efficient use of capital, and a focus on raising living standards in poor countries.  He was also instrumental in advancing the Debt Transparency Initiative, adopted by the Bank Group and the IMF, to increase public disclosure of debt and thereby reduce the frequency and severity of debt crises.

Before joining the U.S. Treasury, Mr. Malpass was an international economist and founder of a macroeconomics research firm based in New York City.  He served as chief economist of Bear Stearns and conducted financial analyses of countries around the world.

Previously, Mr. Malpass served as the U.S. Deputy Assistant Secretary of the Treasury for Developing Nations and Deputy Assistant Secretary of State for Latin American Economic Affairs.  He focused on an array of foreign policy and development issues, including U.S. involvement in multilateral institutions; the Bank Group’s 1988 capital increase, which supported the creation of the Bank’s environment division; the Enterprise for the America’s Initiative; and Brady bonds to address the Latin American debt crisis. He also served as Senior Analyst for Taxes and Trade at the U.S. Senate Budget Committee, and as Staff Director of the Joint Economic Committee of the U.S. Congress.

Mr. Malpass has served on the boards of the Council of the Americas, Economic Club of New York, National Committee on U.S.–China Relations, Manhattan Institute, and Gary Klinsky Children’s Centers, as well as various for-profit entities.  He is the author of numerous articles on economic development.

Mr. Malpass earned his bachelor’s degree from Colorado College and his MBA from the University of Denver.  He was a CPA and undertook advanced graduate work in international economics at the School of Foreign Service at Georgetown University and has studied Spanish, Russian, and French.

Mr. Malpass and wife Adele Malpass, a journalist, live in Washington, D.C. They have four children and share a strong family interest in development issues.

Office of the President