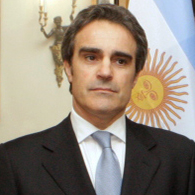 Daniel Pierini, an Argentina national, was appointed Alternate Executive Director for the constituency of Argentina, Bolivia, Chile, Paraguay and Uruguay in May 2016.

Commander, Order of Merit of the Italian Republic

Officer, Order of Merit of Chile

Officer, Order of the Southern Cross

Knight, National Order of the Legion of Honor

Knight, National Order of the Cedar