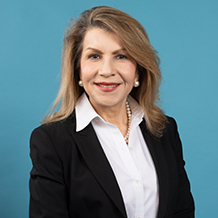 Carmen M. Reinhart is the Senior Vice President and Chief Economist of the World Bank Group. Assuming this role on June 15, 2020, Reinhart provides thought leadership for the institution at an unprecedented time of crisis. She also manages the Bank’s Development Economics Department.

Reinhart’s areas of expertise are in international finance, and macroeconomics. Her work has helped to inform the understanding of financial crises in both advanced economies and emerging markets. She has published extensively on capital flows, exchange rate policy, banking and sovereign debt crises, and contagion.

During her career, Reinhart has worked in numerous roles to address policy challenges including most recently, the coronavirus pandemic and its economic impact. She serves in the Advisory Panels of the Federal Reserve Bank of New York and the International Monetary Fund. Earlier, she was the Senior Policy Advisor and Deputy Director of the Research Department at the International Monetary Fund and held positions as Chief Economist and Vice President at the investment bank Bear Stearns.

Ranked among the top Economists worldwide based on publications and scholarly citations, Reinhart has been listed among Bloomberg Markets Most Influential 50 in Finance, Foreign Policy’s Top 100 Global Thinkers, and Thomson Reuters' The World's Most Influential Scientific Minds.  In 2018 she was awarded the King Juan Carlos Prize in Economics and NABE’s Adam Smith Award, among others. Her book (with Kenneth S. Rogoff)  entitled This Time is Different: Eight Centuries of Financial Folly  has been translated to over 20 languages and won the Paul A. Samuelson Award. She holds a Ph.D. from Columbia University.