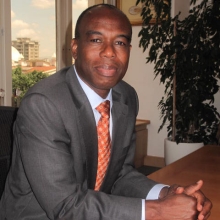 World Bank Country Director for the Republic of Türkiye

Auguste T. Kouamé is the World Bank Country Director for the Republic of Türkiye.

From 2008 to 2014, he held the positions of Sector Manager for Economic Policy, Sector Leader, and Lead Economist in the Poverty Reduction and Economic Management Unit and served as acting Chief Economist for the Middle East and North Africa (MENA) Region. From 2005 to 2008, he held the position of Assistant to the World Bank Group President.

Prior to this corporate-level assignment, Auguste took field assignments from 2002-05 as Senior Country Economist, based in Santo Domingo, Dominican Republic, and, subsequently, as World Bank representative in Haiti. He was a core team member of the World Bank’s 1998/99 World Development Report on Knowledge for Development.

Prior to joining the World Bank as a Young Professional in 1996, he worked at the United Nations Development Program and taught Applied Economics in Côte d’Ivoire and France. Auguste is a national of Côte d’Ivoire.