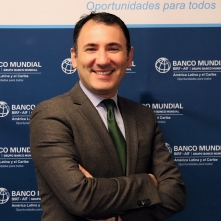 Mr. Caamaño, a Spanish national, has a background and professional experience in the area of international relations and diplomacy. Prior to joining the World Bank, he worked in the Spanish diplomatic corps, assigned at the Embassy of Spain in the USA.

Prior to becoming Country Manager for Panama, he served as Senior Operations Officer in the office of the Vice President of the World Bank for Latin America and the Caribbean Region.