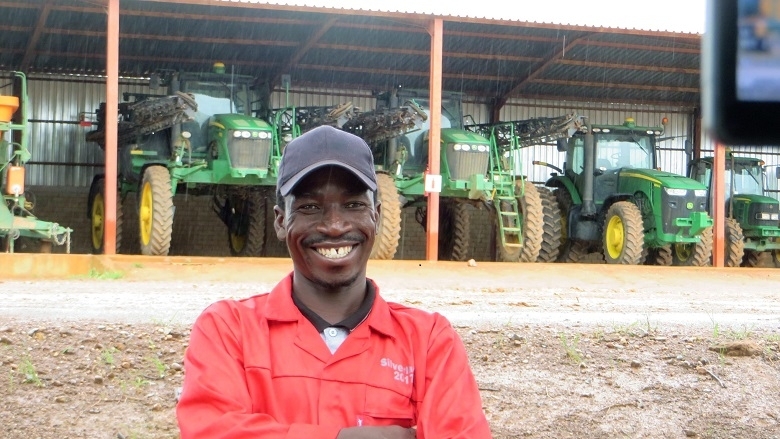 The World Bank has supported investments in Zambia’s agriculture sector since 1969. In 2008, the World Bank Group built on the momentum of earlier investments and technical assistance to focus on helping local financial intermediaries invest in agriculture businesses. In 2013, the Bank Group began leveraging the comparative advantages from across the institution to provide complimentary support. Thanks to broader reforms led by the government, farmers today have better productivity, food security, and access to finance.

For decades, Zambia’s economy has relied on copper mining, a capital-intensive industry that suffers from price volatility and employs only 2 percent of the country’s population. In contrast, almost half of the population is employed in agriculture, a sector that contributes only 8.2 percent to GDP. Despite 40 million hectares of arable land, an abundance of groundwater resources, nutrient-rich soil, and low population density, Zambia’s agriculture sector has not yet reached its full potential. The government recognizes that increasing agriculture and agribusiness are critical for improving incomes and food security, reducing poverty, and creating a more diversified and resilient economy. For this, a significant boost was required.

Once obstacles to private investment were identified, such as a poor enabling environment (notably the investment climate), the World Bank Group set up a collaborative approach. Combined with the government’s willingness to address obstacles and work with farmers, this led to significant progress. Access to finance for poor farmers was, in particular, an important factor in attracting private sector investments to the agriculture sector.

The Zambian government, with support from IFC, the Zambia National Commercial Bank (ZANACO), Zambia National Farmers Union (ZNFU), and RIAS (RaboBank’s advisory arm), implemented the Zambia Emergent Farmer Finance and Support Pilot Program (ZEFP) in 2008 and scaled it up in 2010. It provided 171 farmers with access to finance, technical support, and business training—key areas that helped them increase productivity to transition to commercial farming. Simultaneously, $5 million of a $25 million senior loan to ZANACO was allocated to help finance famers.

The government’s 2016 economic recovery program “Zambia Plus” included a major investment in agriculture to drive job creation and economic diversification. This focused on increasing agricultural productivity, promoting of cash crops (such as cotton, cashew nuts, soya beans, cassava, and rice), and supporting farmers’ access to credit.

In 2017, the World Bank launched the Zambia Agribusiness and Trade Project, with a $40 million credit over five years, to strengthen farmers’ links to markets, build firm-level capability to increase farmers’ incomes, create jobs, and spur regional trade. The program was designed in collaboration with Zambia’s Ministry of Commerce, Trade, and Industry, donor partners, the private sector, and beneficiaries. It aims to mobilize $5 million in private sector capital by 2022 and mobilize capital from increased productivity and scale of private sector investments.

• In 2010, IFC provided ZANACO with a $25 million senior loan to increase financing for agribusiness and other small and medium-sized enterprises (SMEs). This loan facility has become a fully self-sustaining operation.

MIGA’s support to Silverlands led to the employment of 274 permanent staff and management involving 11,740 hectares of cropped land. By 2017, Silverlands operated 14 community cattle-dipping facilities, performing 35,000 dippings per month. This reduced cattle mortality from 9 to 2 percent and led to an increase of $500 per year in family incomes.

The World Bank has supported the Zambian government with reforms to reduce regulatory constraints to investment and promote the commercialization of agricultural activities.

As of February 2018, the World Bank committed $1.24 billion of IDA and IBRD support, of which the largest amount—18 percent—was to the agriculture sector.