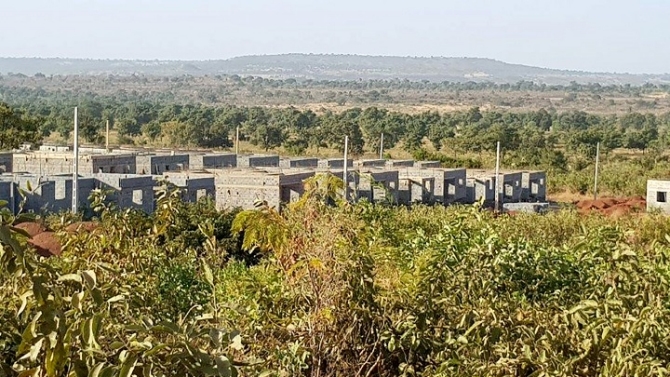 In the eight francophone countries that make up the West African Economic and Monetary Union (WAEMU), housing is scarce, demand is skyrocketing, and costs are high. The World Bank Group supported interventions to expand access to housing finance for lower-income groups in WAEMU in collaboration with Caisse Régionale de Refinancement Hypothécaire (CRRH), the regional mortgage financing company.

Over the next two decades, WAEMU’s population will nearly double, mostly in urban areas. This trend is aggravating a large housing deficit, which mostly affects lower-income groups in a region of widespread poverty. Some 800,000 new housing units are needed every year to address the housing shortage, yet WAEMU banks only issue about 15,000 new mortgages each year. WAEMU countries, together with the World Bank Group and donors, are working to address the chronic housing shortage that has been made worse by mortgages that are usually unaffordable for many households.

CRRH issues long-term bonds in capital markets and lends these funds to financial institutions that in turn provide long-term housing loans to consumers. Its members include 54 commercial banks that are also shareholders. Its largest shareholder is the West African Development Bank (BOAD), which has the ability to spearhead regional housing supply reforms. The World Bank and IFC are providing additional support to CRRH to expand housing finance in the region through investments, World Bank technical assistance, and IFC advisory services.

WAEMU countries have been working with the World Bank on housing finance since 2004. One of the major results was the creation of CRRH, which issued its first bond in 2012. In December 2016, IFC made a $2 million equity investment in CRRH to strengthen its capital base. It also has plans to provide advisory services to CRRH member institutions to improve mortgage lending processes and underwriting standards, including for informally employed households, starting with a capacity building workshop organized in Abidjan, Côte d’Ivoire, in February 2018.

IFC’s equity investment and presence on CRRH’s board assured the World Bank and other donors that it would have good corporate governance and could effectively serve as the implementing agency for strengthening housing policies. The World Bank is planning technical assistance to help WAEMU countries accelerate the pace of housing production, address key constraints for private developers in accessing secured and serviced land, and build affordable homes.

Complementing the ongoing efforts and investments, Agence française de développement provided a €1.5 million ($1.8 million) grant to the Center for Affordable Housing Finance in Africa to support the collection of housing data to design policies for affordable housing.

In 2017, through a 12-year local currency bond issue totaling CFAF 25 billion ($45 million), CRRH was able to lengthen the term of its loans to financial institutions, which in turn lengthened the maturity of mortgages and significantly improved affordability to low-income households. With the support of the IDA 18 Private Sector Window’s Local Currency Facility, IFC participated in the 12-year bond with CFAF 5 billion ($9 million) and has plans to anchor a 15-year bond in 2018, with the objective to support CRRH’s efforts to progressively extend its bond maturity terms to 20 years by 2020. This enabled IFC to access the local currency at competitive rates and amounts by covering the risk of devaluation as well as the risks of currency conversion and transfer.

The World Bank is providing a scale-up credit of $130 million to BOAD, which will transfer the credit to CCRH, marking the first use of the World Bank’s Scale-up Facility credit to a regional organization. The credit will enable CCRH to refinance mortgage loans below $26,000 and allow banks to obtain long-term funding at below-market rates, providing incentive to develop risk management and underwriting systems that serve the low-income segment. An additional $25 million grant will go toward supply-side reforms to strengthen CRRH’s capacity to serve low-income households.

The World Bank’s assistance is also enabling CRRH to  refinance small housing loans (less than $17,000) issued by micro finance institutions. Previously, these institutions served informally employed households yet did not have access to CRRH funding. Through the World Bank’s intervention, households will be able to borrow for five or more years to either purchase or improve a home. The Bank will further provide technical assistance to assess the feasibility and setup of a guarantee fund to address the credit risks associated with lending to informal income borrowers.

Other development agencies share the Bank Group’s goal of expanding affordable housing finance in WAEMU. For example, the German development bank, KfW, signed a €40 million ($48 million) credit line with BOAD in 2016 for CRRH to refinance loans below CFAF 25 million ($42,250) for a maximum maturity of 10 years.

This program dramatically increases the affordability of housing for many households. As of January 2018, CRRH has issued seven local currency bonds of 10- or 12-year maturity in regional capital markets and refinanced about 8,000 bank mortgages since inception. A model shows that extending housing loan tenors from the current 8 to 15 years reduces monthly mortgage payments by 46 percent; a 20-year loan tenor reduces payments by 72 percent.

Overall, the World Bank Group’s investments and support toward strengthening CRRH are expected to crowd in $5 of private financing through the bond market for every $1 it invests, directly addressing the financial needs of the sector. As a result, 50,000 businesses and families are expected to obtain new mortgage loans; 200,000 people will get better shelter; and about 250,000 housing-sector jobs will be created.

IFC’s $2 million equity investment in CRRH, securing a board seat, is helping to raise its corporate governance and lending standards.

With the support of the World Bank’s IDA18 Private Sector Window (PSW), IFC, through its Local Currency Facility, invested in CRRH’s local currency 12-year bond in 2017, and has plans to participate in more long-term bonds.