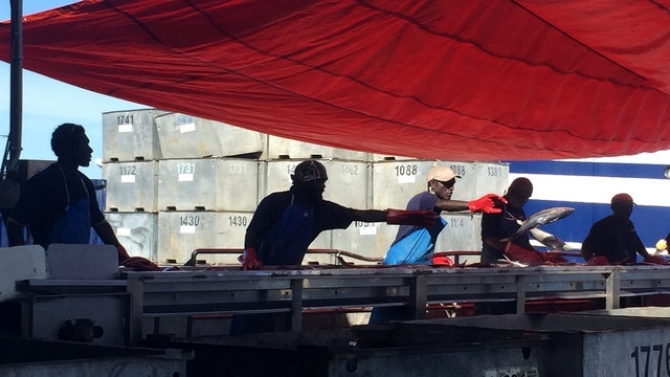 With one of the world’s largest and most plentiful fishing grounds, vulnerable Solomon Islands relies on tuna for revenue, food security and exports. World Bank Group support is boosting capacity to sustainably manage fish resources, increase tuna catches, and tackle key obstacles at the only processing facility, SolTuna, where two-thirds of the staff are women. The World Bank Group also supports an investment at National Fisheries Developments (NFD), SolTuna’s sister company. As a result, the country captures more value from its tuna resources, providing more jobs and expanding opportunities for women.

Like many Pacific nations, Solomon Islands—a country of 600,000 with 30 percent unemployment—is vulnerable to economic and national shocks. Since Solomon Islands generates revenue by selling fishing rights in its waters, sustainable management of its abundant tuna stocks is vital. Revenue from tuna resources accounts for 18 percent of GDP. However, high levels of absenteeism, especially by women workers, was adversely impacting SolTuna’s ability to increase production and exports.

Prior to each IFC investment, the World Bank and IFC consulted with a broad group including donor governments, regional organizations and non-governmental organizations (NGOs). The World Bank provided updated assessments of the tuna fisheries. To maximize finance for sustainable fisheries, support came from the Global Environment Facility and the private sector window of the Global Agriculture and Food Security Program for the World Bank and IFC projects.

Building the Fisheries Sector Through Investment and Advisory Services

IFC’s loan in 2013 to the tuna processing facility SolTuna marked its first investment in wild-catch fisheries in 15 years. It came after initial talks with a leading global tuna supplier, Tri Marine, a controlling shareholder of SolTuna. IFC’s $10 million loan was part of the company’s $27 million upgrade and expansion plans to increase its processing capacity.

With production at SolTuna affected by an absenteeism rate of about 18 percent—mainly among women employees—IFC’s advisory services worked with the company to analyze key factors contributing to this problem. The analysis found that women often skipped work because they ran out of money before payday, and therefore had to sell produce in markets to earn additional income. The need to care for children and worker and family health issues—including domestic violence—were also factors.

The analysis also showed women felt they had limited career prospects. To address this, IFC’s advisory team worked with the company on a series of solutions to encourage women to stay at work. Financial literacy training—for example, teaching women how to save, read their pay slips and understand a company bonus scheme for attendance—was seen as a key factor in cutting absenteeism. Providing access to banking services and creating jobs for women in non-traditional roles also contributed. Additionally, IFC advisory services helped SolTuna and its sister company, NFD, with occupational health and safety standards.

In 2017, IFC approved $20 million in loans to the Tri Marine-owned NFD to support the purchase of two fishing vessels.

• More women at SolTuna have been promoted. Women have also moved off the production line into jobs once considered exclusively male, such as driving forklifts.

"I managed to save money for a house. Now there’s only the walling to go up. I’ve shown my husband I can do it."
Beverly Micha,
a 35-year-old mother of two who used to run out of money before payday. Being responsible for running the household, she would often skip work and head to the market to sell goods for money. After financial literacy training, however, she now knows how to save.

IFC provided a $10 million loan to expand Solomon Islands’ only tuna processing facility and $20 million in loans for fishing vessels for its sister company. IFC also worked on solutions for women, labor and occupational health and safety.

The Global Agriculture and Food Security Program contributed to financing for the vessels.

The World Bank and Global Environment Facility committed $11.12 million to enhance sustainable management of the country’s tuna and coastal fisheries.