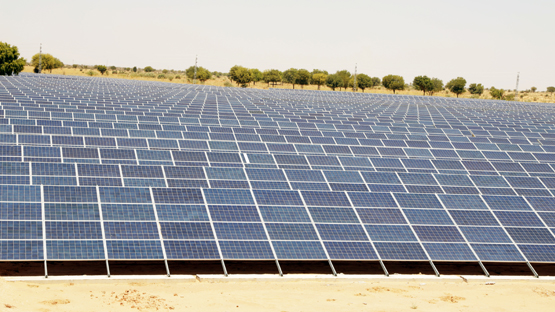 Developing clean, renewable energy is crucial for India as well as the planet. The government has pledged that 40 percent of India’s installed electricity capacity will come from renewable sources by 2030 as a part of its Nationally Determined Contribution (NDC) to the Paris Agreement. Solar power is crucial to achieving this and, with support from the World Bank, the government is making great strides to develop it. In collaboration, IFC has devised an innovative approach to attracting investors, which serves as a model for profitable solar generation.

Scaling up renewable power in India is crucial. The country is the world’s third-largest emitter of CO2 and is also home to 13 of the world’s 20 most  polluted cities. Demand for power is rising too—about 250 million people  (a quarter of the population) lack access to grid electricity. Under the Paris  Agreement, India has committed to producing 40 percent of its electricity from renewable sources by 2030. This will cost an estimated $150 billion—much of which is anticipated to come from private investors and is contingent on simplifying the energy sector’s regulations and improving transmission infrastructure.

Setting Up the Enabling Environment

In 2010, India committed to establishing 100 gigawatts (GW) of solar power capacity by 2022. But by 2015,  only about 2 GW had been added, bringing the total solar capacity to less than 4 GW. Although solar plants can be profitable, investors had been discouraged by inadequate  infrastructure, difficulty in obtaining land, a lack of  familiarity with the sector, and perceived risks.

From 2015, the World Bank began supporting the government’s efforts to address these constraints by providing  $100 million in concessional finance: a $75 million IBRD loan, a $23 million loan from the Clean Technology Fund (CTF), and a $2 million technical assistance grant from the CTF—a World Bank-administered fund for supporting low-carbon technology in developing countries (www.climateinvestmentfunds.org/topics/clean-technologies). This is helping to establish two large solar parks in Madhya Pradesh and develop the infrastructure to connect them to the grid and distribute power to consumers.

In parallel, the government worked on establishing fair and binding arrangements among the key sector players in solar energy—state and national agencies, state-owned enterprises, and private energy producers—as well as improving the regulatory and fiscal environment. This included doubling the portion of energy that large-scale consumers must source from renewables and raising the tax levied on coal-derived energy from less than 3 percent in 2016 to more than 17 percent in 2019.

A major outcome was the establishment of a bankable  solar project for both domestic and international investors. Since 2015, IFC and the World Bank have coordinated their efforts closely and played a crucial role in attracting private investors to the solar industry and delivering the power at competitive prices.

IFC’s innovative approach was to make the Rewa Solar  Park project “investment-ready” prior to auctioning its  construction to developers. The objective was to demonstrate that large-scale solar projects can be implemented  in a time-bound manner and attract commercial finance  by systematically addressing risks.

The Rewa Solar Park established a record low tariff for renewable energy—less than 5 cents per kilowatt hour. Competitive with power produced from non-renewable sources, the tariff has made new investments in coal plants far less attractive. This could not have been achieved without the efforts of IFC to create a bankable project for domestic and international investors, and support from the World Bank to make land and infrastructure available in a timely manner.

Of the $100 million the World Bank is investing in establishing solar parks in India, $18 million was dedicated to infrastructure for Rewa, which leveraged almost 32 times that amount in commercial investment ($575 million).

"The Rewa plant has helped set a milestone in the development of India’s solar sector. It is the country’s first project where renewable energy is procured entirely on commercial principles—without using the subsidy of viability gap funding—by an institutional investor, namely Delhi Metro. The World Bank and IFC have been partners since its inception, providing both concessional funds and transaction advisory services."
Manu Srivastava
Principal Secretary for New and Renewable Energy, Madhya Pradesh

IFC also opened a new market for institutional purchasers  of solar power in India by developing a sound power scheduling arrangement—one that enabled Delhi Metro to procure power alongside the utility. Rewa will supply 60 percent of Delhi Metro’s daytime energy needs, reducing the carbon footprint of moving 3 million people each day and saving about a million tons of CO2 emissions per year. With full commissioning targeted for end-2019/early-2020, 750 megawatts of renewable energy capacity will be added to India’s grid.

Under the SolaRISING India program, the World Bank Group is working to replicate the success of Rewa by  establishing at least three more parks, with a combined 1.5 GW of capacity. Solar parks built and operated by the private sector are expected to contribute 40 percent of the government’s 100 GW target for solar capacity by 2022. This will be crucial for India to achieve its NDC target  of renewables contributing 40 percent of total electricity  capacity by 2030 and will save about 30 million tons of CO2 emissions per year.

The World Bank is providing $100 million in concessional finance to boost solar energy in India. This consists of $75 million in loans from IBRD and $25 million from the Clean Technology Fund (CTF), of which $23 million is provided in loans and $2 million in technical assistance grants.

IFC’s Transaction Advisory team facilitated around $575 million in private investment by helping with project structuring and to negotiate with international investors. It also provided a loan of $128 million to solar developers and helped mobilize about $309 million from other lenders.