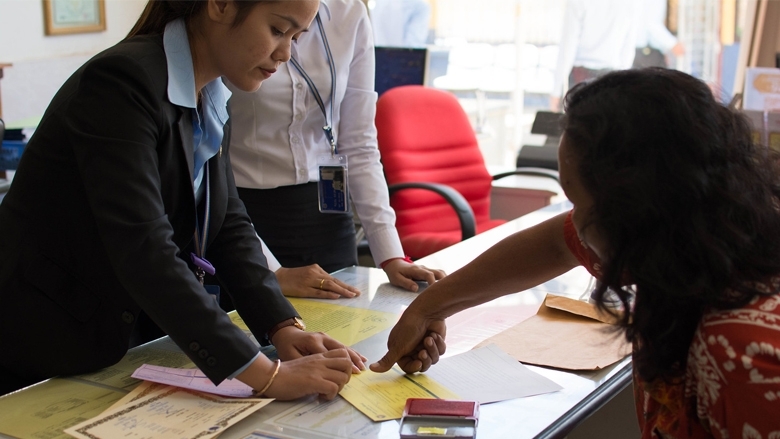 Over the past few years, Cambodia has experienced strong economic growth driven by foreign capital inflows and money growth under dollarization. Dollarization, however, has been mainly an urban phenomenon, while rural areas have lagged, leaving micro, small- and medium-sized enterprises (MSME) in the Riel-based rural economy highly exposed to currency risks. The limitation of dollarization has become apparent as it hampers the ability of authorities to make effective use of monetary and exchange policies, and leaves the rural poor and MSMEs, whose primary incomes are in local currency, exposed to exchange rate fluctuations and a potential currency crisis.

The International Finance Corporation (IFC) has developed a project utilizing new the IDA Private Sector Window (PSW) and aims to pave the way for further development of Cambodia’s capital markets.

The project’s goal is to increase Hattha Kaksekar Limited’s (HKL) lending in local currency in the country’s rural areas. It consists of an IFC investment of up to US$20 million—equivalent amount in Cambodian Riel (KHR)—to participate in the country’s first KHR bond. The bond will be issued by HKL in an amount of up to US$30 million equivalent in KHR and will have a three-year tenor. HKL is the third largest deposit-taking microfinance institution in the country and a long-time IFC partner in good standing.

This is the first local currency bond ever issued in Cambodia and will directly support rural micro and small enterprises, including women entrepreneurs, who have limited access to loans in local currency and are therefore exposed to foreign exchange risk for their loans. If successful, the project would produce the demonstration effect needed for other issuers and local investors to gradually participate in this nascent market.

The project is a powerful illustration of creating markets with support from the IDA PSW, which will allow IFC to provide HKL with medium-term local currency funding via a market-based mechanism.

The IDA PSW Local Currency Facility (LCF) location in support of the IFC investment consists of an open FX swap with IFC of up to US$20 million to cover the currency risk to enable IFC to subscribe to HKL’s bond in KHR as its anchor investor. Without the support from IDA PSW LCF, this transaction would not be feasible. Swap rates from the current alternative solution would translate to end consumer loan pricing levels that exceed market sounding feedback levels and sustainable lending to target micro borrowers.

The project will directly impact the local currency capital market. By playing an anchor investor role in the bond issuance, IFC is expected to create a replicable model and deepen the local currency funding pool, providing a valuable life-line to MSMEs and women entrepreneurs in Cambodia in the years to come. By helping to create the domestic debt market, the project will be the first step to developing needed investments and enable accumulation of capital stock which will eventually contribute to greater economic stability and growth.

The development of a local bond market coupled with incentives to promote the use of KHR are key steps to help foster domestic savings and progressively attain exchange rate flexibility. A successful transaction could demonstrate that the legal and infrastructural framework for local bond issuance are in place and are feasible.