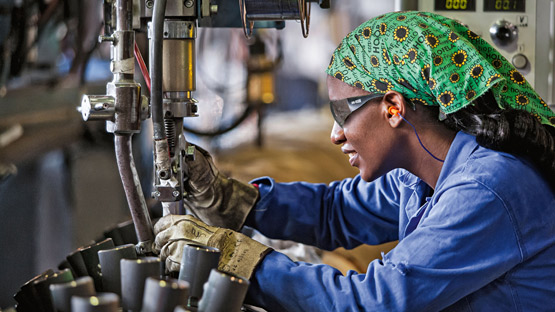 In 2009, the government of Cameroon awarded the Kribi Power Development Corporation (KPDC) a 20-year concession to build, finance, and operate the 216-megawatt Kribi natural gas-fired power plant and associated transmission line. The World Bank Group and other organizations supported the project using a project finance structure that overcame capacity and regulatory constraints. Completed in 2013, Kribi is the country’s first independent power plant to run on natural gas, and the first infrastructure project to obtain long-term financing in local currency. It enabled the country to increase power reliability until hydropower projects started operating in 2017.

The government wanted local banks to participate in the financing of the Kribi project to mitigate foreign exchange risk and to build local lenders’ capacity to provide long-term finance. Local lenders were interested in participating, but they had limited experience in project finance and regulations limited loan tenors to seven years. Additionally, the government’s lack of track record in private financing created a high degree of perceived risk among local lenders.

The World Bank supported the passage of an electricity law in 1998, which was the first phase of policy and structural reforms designed to improve efficiency and governance and introduce private sector participation in Cameroon’s power sector. Among the outcome were the establishment of the sector regulator, Agence de Régulation du Secteur de l’Electricité (ARSEL), and the rural electrification agency, Agence d’Electrification Rurale (AER). In addition, with IFC acting as advisor, Cameroon privatized its state-owned power utility, Société Nationale d’Electricité (SONEL).

To address bottlenecks in electricity transmission, the government approved a new electricity law in 2011 that paved the way for the creation of a new public transmission company, Société Nationale de Transport de l’Electricité (SONATREL). In 2016, the World Bank provided a $325 million loan to assist SONATREL in its operations and with capacity building.

The World Bank, IFC, and MIGA joined forces to mobilize financing for the Kribi project in 2011. IFC provided a direct loan of €60 million and acted as the lead arranger of a $182 million debt financing package to KPDC. The syndicated loan was mobilized from development finance institutions including the African Development Bank (AfDB), European Investment Bank, Netherlands Development Finance Company (FMO), Proparco (an affiliate of the Agence Française de Développement), and the Central African Development Bank.

The debt, which has a 14-year maturity, also had a local-currency tranche equivalent to €60 million provided by domestic commercial banks. The World Bank structured an IDA guarantee that allowed local commercial banks to extend their loan tenors while respecting the regulation limiting loan maturity to seven years. The guarantee also provided protections against government-related risks, including termination and payment agreements. These guarantees provided local banks with the comfort they needed to participate and assisted in raising much-needed local financing. In 2014, MIGA issued a guarantee of $78 million against breach of contract risk supporting the equity investment by Globeleq Energy Holdings (Cameroon) in KPDC.

Besides the Kribi project, the government of Cameroon continues to work with the World Bank Group and other development partners to provide its citizens with reliable, affordable energy. Projects include the $126 million Dibamba thermal power project, the country’s first independent power plant in which IFC invested $30.6 million in 2011 as part of a $92 million financing package extended by IFC, FMO, and AfDB. MIGA issued a guarantee of $31.5 million, again to Globeleq Energy Holdings (Cameroon), against the risk of breach of contract. In 2014, MIGA further supported the transmission and distribution system by extending a guarantee of $180 million covering an equity investment by Energy Cameroon Coöperatief B.A of the Netherlands in ENEO Cameroon, which Sonel was renamed.

The Lom Pangar dam, with the support of a World Bank $132 million IDA loan, was completed in 2017 and increases the guaranteed, all-season hydropower capacity on the Sanaga River by 40 percent. The Nachtigal hydropower plant, to be fully commissioned in 2023, is expected to increase the country’s current power capacity by roughly a third. The project is developed by the French company Electricité de France, the government of Cameroon, and IFC. IFC is the global coordinator of the lender group and the World Bank and MIGA together plan to provide guarantees totaling $578 million.

The pioneering project is the first gas-to-power public-private partnership implemented in Cameroon and in the Central African region under a project finance structure. Its success will pave the way for the country to make significant public investments as well as to mobilize private sector investment.

As of mid-2017, Cameroon’s power sector has raised $969 million in total private investment.

IFC provided a direct loan of €60 million  and acted as the lead arranger of a $182 million debt financing package for KPDC to build and operate a natural gas power plant.