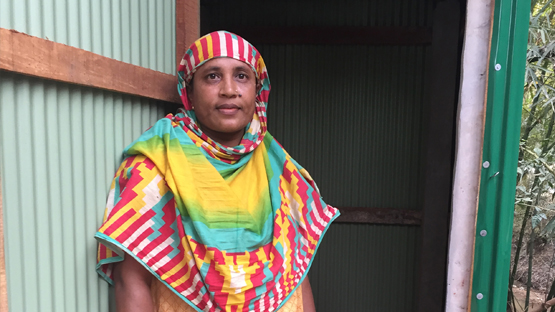 The World Bank Group—along with international and local nongovernmental organizations (NGOs)—is a longtime partner of the Bangladesh government in improving access to sanitation. Strong progress has been achieved, and the Bank Group continues to support the government’s initiatives, particularly by mobilizing the country’s well-developed microfinance sector. A $3 million GPOBA grant, supported by technical assistance, crowded in $21 million of commercial financing so that rural households could affordably invest in hygienic latrines. This approach is being scaled up in Bangladesh and potentially other countries.

Bangladesh has nearly eliminated the practice of open defecation, the first country in South Asia to do so. But many latrines are poorly constructed and unhygienic, which can be harmful to the environment and the user. The most recent national hygiene survey in 2014 found that access to hygienic latrines—which safely dispose of human waste and block transmission of pathogens and diseases—stands at 34 percent of the population, well below 2017’s Sustainable Development Goal global baseline estimates of 47 percent for basic sanitation coverage. This particularly affects low-income rural communities. The government is helping transition rural households to better sanitation, but the upfront cost required to install hygienic facilities is prohibitive for most.

The World Bank Group combined the expertise of GWSP and GPOBA and implemented community-based interventions to install and maintain sanitation facilities in rural areas, as well as facilitate inspections by independent consultants. The government and the Bank Group used GPOBA’s grant facility and collaborated with microfinance institutions (MFIs) to demonstrate results-based financing for the sanitation sector. The approach made it possible for households and small entrepreneurs to borrow and invest in hygienic facilities.

To encourage households to invest in latrines, WSP piloted sanitation marketing in five villages in Bangladesh in 2009. It supported development of new hygienic quality latrine models that were more attractive to consumers, implemented marketing to boost demand, and developed sanitation as a viable business for the private sector. These interventions prompted behavioral change and supported supply chain development. Previously, few MFIs were willing to enter the sanitation market; those that did provided loans of between $15 to $20 to construct a basic toilet (which separates human waste but does not block the spread of pathogens). After these interventions, more MFIs offered loans of between $50 to $125 for the new latrine models. By 2011, the program expanded to 100 villages in collaboration with small businesses working in rural sanitation, as well as NGOs and MFIs.

Building on WSP’s marketing work, in 2015 GWSP provided $275,000 in technical assistance to the government to create demand and influence consumer behavioral change. The project also helped MFIs develop loans to households and small construction companies to buy and install sanitation facilities, as well as mitigate lending risks. The technical assistance included training for these companies to build good-quality, affordable models of hygienic latrines that low-income households were most likely to purchase.

Complementing the technical assistance, GPOBA provided a $3 million grant (funded by the Australian Department of Foreign Affairs and Trade, a donor to GPOBA) and implemented a program from 2016 to 2018, in which a results-based subsidy (10 percent to 12.5 percent of the loan) helps reduce the debt service owed by poor households for sanitation loans. The subsidy is provided when a hygienic latrine is installed to quality standards by pre-qualified local construction entrepreneurs, holding both the installers and financiers accountable. The project targets poor households by offering the subsidy only for lower-cost hygienic latrines that cost between $50 to $125, as opposed to more expensive models that cost up to $220. The partial subsidy effectively reduces the households’ weekly repayment by 11 percent. It has improved access and affordability of high-quality options for poor households, reduced lending risk for MFIs, and expanded the use of microfinance for rural households who want sanitation, but were prevented by the high upfront cost.

GWSP’s technical assistance combined with GPOBA’s grant incentivized 21 MFIs to contribute to the sanitation microfinance program. The GPOBA subsidy was instrumental in leveraging commercial capital from participating MFIs. Through the Palli Karma-Sahayak Foundation, a government-backed wholesale microfinance institution that provided loan capital to many of the partner MFIs, the program was also able to offer sanitation loans with better financing terms.

As of June 2018, 170,000 households have installed hygienic latrines through nearly $21 million in household loans, around 90 percent to female borrowers. The recorded repayment rate is more than 99 percent. The program has also leveraged $1.34 million in loans from participating MFIs to more than 1,030 local entrepreneurs for business expansion in rural Bangladesh.International NGOs, such as Max Foundation, Plan International, and WASH Alliance International, have also built on the World Bank’s experience and mobilized the private sector to expand sanitation loans across Bangladesh.

Thanks to Bangladesh’s unique experience with rural microfinance, lessons learned here can be replicated elsewhere and are being incorporated into the design of a larger World Bank-funded project.

The Global Water Security and Sanitation Partnership (GWSP) trust fund followed up in 2015 with $275,000 in technical assistance to demonstrate use of microfinance to encourage sanitation investments by rural households and entrepreneurs.

The Global Partnership on Output-Based Aid (GPOBA) provided a $3 million grant in 2016, which leveraged $21 million in commercial capital for rural sanitation loans.